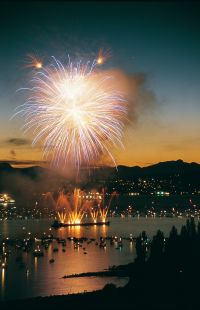 ©2006 Colin Jewall July and August in Vancouver bring an incredible display of fireworks at the Celebration of Light.

Vancouver's joie de vivre is bound up with the outdoors -- all that beauty! Roller-blading the seawall. Golfing inner-city courses. Mountain biking on the North Shore. All are huge, so are water sports, particularly sailing and kayaking.

Thousands hike the precipitous trails of the North Shore almost year-round, including the grueling Grouse Grind. Skiing and snowboarding draw legions to Cypress Bowl, Grouse and Seymour mountains, and Whistler. There are always sport-related competitions and celebrations.

Major events range from the Chinese New Year parade to the mid-summer fireworks in English Bay. Festivals happen from spring to autumn, with one or both feet in the outdoors. They include the Vancouver International Jazz Festival (June); Vancouver Folk Music Festival (July); Festival Vancouver, with jazz, classical, and world music (August); and Vancouver International ComedyFest (September). Gay Pride Week, including a big parade in English Bay, is in early August.

Insider's Guide: The Best of Special Events & Attractions in Vancouver

Insider's Guide: The Best of Special Events & Attractions in Vancouver

Granville Island is no secret. But when all is usually quiet, artsy byways come to life with inspired festivals. In September, comedians from around the world bring their madcap humor to its plazas and patios. Audiences are charmed to bits -- even (literally) tied into knots. The annual Fringe Festival, also in September, is a phantasmagoria of short plays at 11 venues. The festival is famously uncensored, with full cheek and wild surprises.

For a sense of Vancouver's large and vibrant Chinese community, cruise the Richmond Night Market (12631 Vulcan Way, Richmond), or the Chinatown Night Market (100 and 200 blocks of Keefer St). The Richmond event is huge; the Chinatown one small. But both are full of the good vibes that characterize this city's multicultural reality. There's lots of enticing street food, wonderful trinkets from China, and free entertainment.

in June, with more than 100 teams drawing on people of every ancestry. This is another sign of the growing connection between Vancouver and Asia, where dragon-boating originated. Winners of this popular festival go on to international competitions.

Late August to early September marks the annual (and joyous) Fair at the Pacific National Exhibition (PNE). Rooted in British Columbia's agricultural sector, it still features the likes of the Safeway Farm Country and the Pacific Spirit Horse Show. But there's myriad other exhibits and attractions, rides, games, foods, and entertainment.

Immerse yourself in this vast fun-fair, and you'll forget there's an outside world!

"Celebration of Light" fireworks displays explode over English Bay in late July and early August. The event draws hundreds of thousands of children and adults with beach blankets in hand to the beaches at English Bay and Kitsilano on four consecutive Wednesdays and Saturdays. International pyrotechnic manufacturers each have their own night, culminating in a mega-finale.

Capilano Suspension Bridge and Park (3735 Capilano Rd, North Vancouver) features a hemp rope bridge strung across the Capilano Canyon, which is a big tourism draw. The bridge was first made in 1889, then replaced with a wire cable bridge in 1903. It runs (and swings) 450 feet (137 meters) across the canyon and 230 feet (70 meters) above the river. A recent addition is the Treetops Adventure -- seven adjoining suspension bridges at 100 feet (30 meters) above the forest floor. The site also includes native Indian cultural center and several restaurants.

Hastings Racecourse (Gate 6, off Renfrew Street into Hastings Park) has been in business for more than a century. The track offers thoroughbred racing April through November, and simulcast racing the rest of the year. An added attraction is the setting, with fine views of the North Shore Mountains.

Harbour Centre Tower (555 West Hastings St) has a glass-wall elevator that can zip you to the top for a 360-degree-view of Greater Vancouver.

Great Canadian Casinos (8811 River Road) is the newest and grandest facility in the RiverRock Casino Resort in Richmond, just south of Vancouver. It includes a luxury hotel, nine restaurants, Vegas-style entertainment, and a full casino complex, including 1,000 slots. A smaller full-range casino is at Vancouver's Holiday Inn (709 West Broadway).