Getting In, Getting Around Vancouver 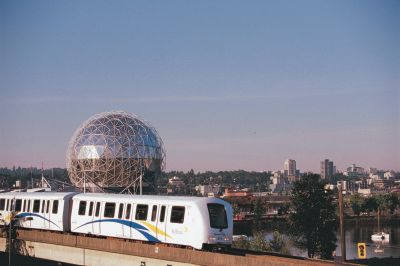 ©2006 SkyTrain SkyTrain is a great way to get around, whether you're sticking to the downtown area or need a way to get out to the suburbs.

Because the city is laid out on a grid, traveling the streets of Vancouver is quite easy, whether you're driving or on foot. Here are some tips regarding Vancouver transportation:

Vancouver International Airport is located on Sea Island in Richmond, south of Vancouver.

Rental car: Major car rental outlets are located on the ground floor of the parkade, a few steps from both the international and domestic terminals. Pickup and returns are provided directly from these staffed outlets. Rates are comparable to elsewhere in North America. U.S. citizens will not need any special permits to rent vehicles, but have your passport handy in case you are asked for additional identification.

Taxi: Metered taxis run from outside the terminal 24 hours a day; the fare to downtown is $23 to $26 CDN. It takes about 40 to 45 minutes and longer during morning rush hour, which is roughly between 7 and 9 am. Most taxis are standard four-passenger vehicles; there are also vans, some equipped to carry wheelchairs.

Public transportation: The YVR Airporter shuttles between the international and domestic terminals and downtown hotels. Public buses on the No. 424 route pick up outside the domestic terminal. They connect to downtown and other routes at the Airport Station Bus Terminal, located outside the airport. For details, visit www.translink.bc.ca.

Rush hour: Driving into the city is easy. You follow Grant McConachie Way out of the airport and the signs to Vancouver. You'll cross the Arthur Laing Bridge and take the right off-ramp to the "City Centre." The route circles west onto Southwest Marine Drive, then turns north onto Granville Street, which runs all the way to the downtown area. The morning rush hour into the city is 7 to 9 am; the evening, outbound, 4 to 6 pm.

Highway 1 (the Trans-Canada) skirts the eastern boundary and continues over the Ironworkers Memorial Bridge to the North Shore and Horseshoe Bay (where you can find BC Ferries). Highway 99 begins at the Canada-U.S. border, continues through Vancouver on Oak and Granville streets to West Vancouver, and connects with Highway 1 and Highway 99 to Whistler.

As for driving in the city, it's a simple grid. Except for the downtown peninsula, east-west streets are "avenues" -- No.1 (starting in the north) to 77. Ontario Street is the division between "east" and "west" avenue addresses. Some downtown streets are one-way.

Pedestrians have the right of way in Vancouver and have grown so assertive that they step into the street without looking left or right, so it's important to be aware of this.

Rules of the road: Vancouver drivers are generally orderly and polite. This isn't to say you needn't drive defensively -- the city has its share of bad drivers. Where vehicles yield into a funnel from two or even three lanes, as in entering the Lions Gate Bridge, drivers neatly alternate; aggressive driving is frowned upon. You can turn right on a red light except on the rare occasion when a sign forbids it.

Public transportation: Buses provide most public transit. An adult one-zone fare is $2.25. (The 98 B-Line between the airport and downtown is two zones -- $3.25).

SkyTrain is an elevated light-rail system that joins downtown Vancouver with the east side and with suburbs that include historic New Westminster. The same fares apply. Downtown SkyTrain stations include the Waterfront (on Cordova Street), which connects with the SeaBus to Lonsdale Quay in North Van. West Vancouver runs a "Cadillac" Blue Bus system, which picks up passengers on Vancouver's Georgia Street for travel to West Van, including Horseshoe Bay. From here BC Ferries depart to the islands of Howe Sound, the Sunshine (Sechelt) Coast, and Vancouver Island.

Taxis, on foot, by bike: Metered taxis are reasonably priced. There's a dire shortage, however, and getting a taxi ride may entail an annoying wait, so it's best to call ahead to the taxi company. Though the downtown peninsula is large, it's pedestrian-friendly. With buses and taxis, a car isn't required. However, if you want to go to the North Shore or beyond, you may need one.

Vancouver has a network of cycling routes, suitable for most bicycle riders, but only the most skilled riders should use the major arterial streets.

Most of the city's special events and attractions involve the great outdoors. There are, however, some unique things to do inside on those rainy Vancouver days. See the next section for some suggestions.