Are there undiscovered people? 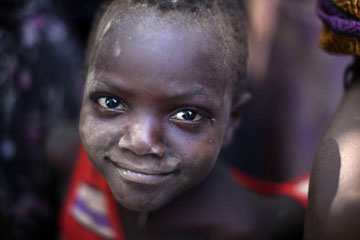 A young boy from the remote Turkana tribe in Northern Kenya waits to be selected for food aid during a drought.
Christopher Furlong/Getty Images

In 2008, newspapers announced the discovery of a previously unknown group of humans in the Brazilian Amazon rainforest, illustrated by startling photos of stone-age warriors aiming arrows at an aircraft overhead. "The Amazon tribe that hid from the rest of the world-until now," one British newspaper, The Independent, breathlessly proclaimed [source: Howden]. As it turned out, that wasn't exactly true; the Brazilian government had known about the reclusive tribe's existence for nearly a century, though in recent years, officials had avoided contact to protect them from civilization's diseases [source: Lloyd]. The Indian expert Jose Carlos dos Reis Meirelles, who led officials on the search for the tribe, later revealed that he had been following them from a distance for two decades [source: Downey].

It wasn't the first time that someone had emerged from the jungle with a tale of encountering a lost tribe. In 1977, a French doctor claimed to have discovered a lost tribe in the Peruvian Amazon whose members wore nothing but loincloths and jewelry, forced prisoners to work in a gold mine, and occasionally performed grisly, heart-ripping human sacrifices [source: UPI]. Alas, that story apparently wasn't true, either.

Nevertheless, we can't help but wonder: Are there still undiscovered humans in remote parts of the world -- people who have somehow have managed to elude both the curiosity and frequently murderous urges of their more technologically- and socially-advanced kin?

We probably shouldn't get our hopes up. Experts say that with civilization caving away the remaining tropical rainforests at an alarming rate and with the increasingly sophisticated technologies available to detect a human presence in the wild, it seems increasingly unlikely that a bona-fide lost tribe is still out there. But again, we can't rule it out completely because there still are places like the Brazilian state of Amapa, where 70 percent of the territory is unexplored forests [source: Green Street Scene]. And, if there really are undiscovered people, we wouldn't know they were out there, now would we?

Find out more about what it means for a people to be "undiscovered" on the next page.

Humans have been dispersed throughout all the continents except Antarctica for many thousands of years. So the concept of a group of people being "undiscovered" really exists only in the imagination of an explorer from somewhere else. Sometimes that imagination runs wild. Centuries ago, when the Europeans were first starting to venture beyond their own continent, their mapmakers filled in the spaces that they didn't know anything about with lands inhabited by fanciful mutants and half-men-half-beasts. [source: Harvey]. It must have disappointed them when they eventually discovered that the inhabitants of the Americas' unknown places had anatomy markedly similar to their own.

A people is one of those lofty-sounding academic terms whose precise meaning is seldom explained. When we're talking about unexplored places, it seems to be a euphemism for tribe. That's the archaic anthropological term for a separate group of humans who share a common territory, language, history and culture -- the mishmash of knowledge, beliefs, morals, rules, ideas, customs, arts and whatever else gives them a distinct identity [source: Anthrobase].

Even today, when we talk about the possibility of undiscovered groups of aboriginal people, we're really talking about ones we don't know about. Other aboriginal people in an area, who may have traded with them or warred against them, might know all about that "mystery" group. Another trap that unwary people (the journalists who botched the lost-tribe-aiming-arrows-at-airplanes story, for example) fall into is using the word "undiscovered" interchangeably with "uncontacted." The latter actually refers to a group that we know exists, but with whom we haven't interacted, at least not recently. Survival International, a London-based organization that works to protect aboriginal peoples, estimates that there are about 100 uncontacted tribes around the world, in locations ranging from South America to the islands in the Indian Ocean and the Pacific [source: Survival International]. Even defining who qualifies as uncontacted gets a little tricky, so in recent years, the term isolated -- meaning groups that simply avoid contact with outsiders -- seems to be used more and more.

Whether undiscovered, uncontacted or isolated, it's easy for us to imagine these groups as simple, naïve forest dwellers, ignorant of the wonders of modern civilization. In reality, according to Survival International, most of them know all they need to know about our society and want no part of it. In the next section, we'll discuss why.

Why Would People Hide from Modern Civilization?

According to Survival International, the most isolated tribe in the world is the Sentinelese, a group believed to be directly descendent from the first humans to emerge from Africa. For the past 60,000 years or so, they've lived in a remote corner of the Andaman Islands in the Indian Ocean, having so little contact even with other Andaman Islanders that they speak a different language. But the Sentinelese aren't stuck in the Stone Age -- they make tools and weapons from metal, which they recover from shipwrecks. They know about the outside world. They just don't want any part of it. When an aid helicopter flew low over their territory after the 2004 Indian Ocean tsunami, a man rushed out and angrily aimed an arrow at it. The message was clear: Stay away [source: Most Isolated].

It's not that all isolated tribes have tried to escape from civilization. It's just that often the ones who didn't became enslaved or wiped out. It's a tradition that goes back to the venerable Christopher Columbus, whose first thoughts upon encountering the friendly Arawak people in the West Indies was that they would make good servants [source: Columbus]. And we all know what later happened to the Aztecs and Incas and to Native American tribes in the United States after they were contacted by Europeans. And, witness the more recent plight of the Akunzu, a tribe that hunted and grew corn in a remote region of western Brazil for thousands of years, before being discovered in the mid-1980s by homesteaders who wanted the land for soy cultivation and cattle ranches. In 1990, outsiders massacred the entire tribe of several hundred, except for seven who escaped into the forest and hid. In 2009, a newspaper reported that just five of the Akunzu remained alive [source: Adams].

Even when outsiders aren't homicidal, they bring an even bigger threat: microbes for which aboriginal peoples lack immunity. In the late 1980s, for example, after well-meaning Christian missionaries made contact with the Zo'é tribe in Brazil, 45 of the tribe's members promptly died of flu, malaria and respiratory diseases. Fortunately, the Brazilian government expelled the religious group, and the Zo'é gradually went back to their isolated but healthy existence [source: Threats].

So it's not too hard to figure out why an aboriginal group would want to be invisible. The big question is whether they could pull it off.

Should We Play Hide-and-Seek with Undiscovered People?

As recently as the late 19th century, when one geographer estimated that one-eighth of the planet's land surface was still unmapped, a nature-savvy, self-sufficient band of "primitives" probably could have evaded civilized stalkers without too much difficulty, simply by fleeing deeper into the vastness of the wild. Today, though, there aren't that many unexplored stretches of wilderness left, and what remains is rapidly shrinking, thanks to logging, farming and oil companies. Beyond that, new technological tools available to outsiders, such as satellite photography and GPS tracking devices, make it increasingly difficult for groups to hide. When the supposedly lost Brazilian tribe was spotted and photographed from the air in 2008, they were in a clearing that someone had first noticed on Google Maps [source: Downey]. Since then, the Brazilian government has equipped aircraft with heat sensors that can track isolated tribes from above, even if they can't be seen [source: Associated Press].

Even if we're not quite there yet, the day will eventually come when it's no longer possible to hide. That's potentially both good and bad news for the isolated tribes. If government agencies in Brazil and elsewhere can locate the reclusive aboriginal peoples, it may enable officials to protect them and their home areas from encroachment, before they're discovered and wiped out by those who covet their lands. On the downside, as it gets easier to find isolated tribes, it's going to be tougher and tougher for them to avoid contact with a civilized world that is both repulsed and fascinated by them. Seed Magazine reports, for example, that four isolated Peruvian Indians died from respiratory infections in 2008, after a reality TV show crew illegally slipped into their government reservation. And after the media went gaga over the not-lost Brazilian tribe in 2008, the Indian expert who helped the government locate them was approached by travel agents, who proposed setting up "Savage Tourism" trips.