How could a tribe remain undiscovered in the Amazon in the 21st century? 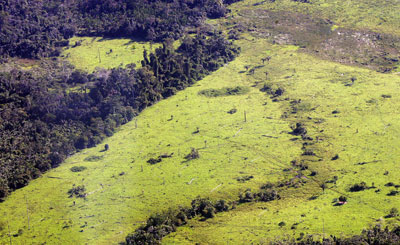 The Anapu region in Northern Brazil shows the effects of deforestation in April 2005. Uncontacted tribes are retreating further into the diminishing forest to preserve their culture and protect their health.
ANTONIO SCORZA/AFP/Getty Images

Every picture tells a story. And whether it's a $15 million shot of Brangelina's twins or a married politician spotted on the town with another woman, the public responds to images and clamors for the details behind the shot.

The aerial photographs of the mysterious Amazonian tribe are no exception. But as of yet, there's not much to report. Anthropologists suspect they could be related to tribes like the Amahuaca, Aruak or Tano. We can infer that they wore body paint to display aggression toward the crews flying overhead. Other than that, we're stumped. And if the Brazilian government has its way, that's how we'll stay.

José Carlos dos Reis Meirelles, tribal expert at FUNAI (Brazil's National Indian Foundation), said that the purpose of releasing the photos was to show disbelievers that there really are uncontacted tribes living in the world today and that the ranching, logging and oil industries are a threat to them. While the Amazon rainforest means big business in terms of valuable woods (like mahogany and cedar) and oil (about 75 percent of Peru's rainforest is thought to hold reserves), it's also one of the last sacred spaces for people who wish to remain sheltered from the rest of the world [source: Guardian].

Survival International explains that these tribes make a deliberate decision to stay uncontacted. The impression that many tribespeople have of outsiders isn't very favorable: Loggers, ranchers and oil prospectors raze their land and homes, forcing them to retreat deeper into the forest. And even outsiders that come in peace, like missionaries, threaten tribes with chicken pox, influenza and the common cold. While a bad bout of the flu may keep us in bed for a week, it could mean death for someone who doesn't have our reinforced immune systems. Miriam Ross, a Survival International spokeswoman, explains that first contact with a tribe typically results in half the group dying within a few months.

While the Brazilian and Peruvian governments are working to preserve the land that these tribes live on, many loggers enter the forests illegally and wreak havoc. Another complication is presented by the possibility of tapping Peru's rich oil supply. While Peru has worked to keep prospectors away from lands populated by uncontacted tribes, the French company Perenco intends to search for oil in Northern Peru, where two tribes are known to live. What's more, the company is within its rights -- it obtained access to this region of the country when it bought the U.S.-owned Barrett Resources in early 2008. Perupetro, the organization that governs oil prospecting in Peru, is trying to help preserve lands inhabited by tribes, which complicates President Alan Garcia's vision of Peru becoming a petrol-producing giant by 2011 [source: Economist].

In the grand scheme of history, this isn't a new conflict. Preservation has long dogged progress, and vice versa. The conflict just has a new face. But will the air of mystery behind these new and unfamiliar faces garner sympathy? That remains to be seen. The photographic proof of such a tribe's existence forces us to accept the fact that with each falling of a tree, people are driven one step further into an ever-dwindling forest. And if there really are 99 more uncontacted tribes left in the world and half that number in the rainforest, we might find a lot more startling images in our newspapers in the future.