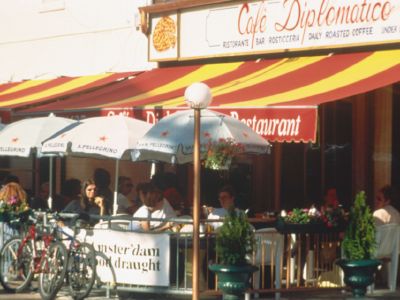 Once upon a time, Toronto nightlife was an oxymoron, and the rest of Canada, particularly Montrealers, considered the city a place to work, not a place to play. How times have changed, and today Toronto boasts nightlife on a par with cities like Chicago and New York.

The Toronto Entertainment District is a stretch of downtown between the CN Tower and Queen Street that teems with nightclubs, wine bars, and pubs, and two of Toronto's major theatres -- The Edwardian-era Royal Alexandra (260 Kings St W) and the plush and modern Princess of Wales (300 King St W), with its Fran Stella ceiling murals and Gaudi-inspired interior.

Wander along King Street for a pre-theater meal and have after-theater drinks at Monsoon (100 Simcoe St) or in the ultra-cool bar in the nearby Mobil Three-Star Hilton Toronto Hotel.

Insider's Guide: The Best of Nightlife & Entertainment in Toronto

Insider's Guide: The Best of Nightlife & Entertainment in Toronto

Resto-lounges -- that unique fusion of bar and restaurant where palates meet percussion -- have been popping up all over town. Some succeed, others try their best but can't rise to the occasion. Amber (119 Yorkville Ave) in Yorkville is a basement boite where the demimonde sups and sips simultaneously. Hard to pull off, but Signe Langford's food is stellar, and the music isn't hair-raising: it morphs from jazz to French accordion to house music.

You'll have no problem finding a dining and/or dancing option on College Street's Little Italy (on College Street running roughly eight blocks west of Bathurst). Try nouveau Indian cuisine at Xacutti (503 College St), then get ready to dance, as the area comes alive with more than a dozen venues. For Latin music and dancing (as well as a campy drag show every weekend), check out El Convento Rico (750 College St). If it's a more loungelike mood you'd prefer, have after-dinner drinks at Sutra (612 College St) or Lily (656 College St).

The Academy of Spherical Arts (38 Hanna St) is a 22,000-square-foot venue named for its location in the former Brunswick Billiards Factory. This club, which has attracted the likes of Woody Harrelson and Bruce Willis, is a perfect spot to sip cocktails or cross cues on one of its 14 antique billiards tables. There are four distinct rooms, each with its own vibe, and full dinner menus are available along with a legendary list of 120 malt scotches,180 beers, and about 100 champagnes.

Pop into the birthplace of Canadian stand-up comedy at Yuk-Yuks Comedy Club (224 Richmond St W) and you'll see why Canada is the source for great comedians, from Jim Carrey, Dan Akroyd, Rick Moranis, Mike Myers, and Martin Short to today's stars like Russell Peters and Colin Mochrie. If you have dinner reservations you can also count on the best seats in the house.

The Bloor Cinema (506 Bloor St W) is a vintage movie house in the middle of the Annex neighborhood, and one of the best places in town to see rare movie classics, as well as premieres of new films from around the world. It also hosts a number of smaller film festivals, so be sure to check and see what's playing on the Web site. A pre- or post-movie meal is easy to find anywhere along this part of Bloor, where the choices run from sushi to Hungarian soul food.

When Torontonians want to relax, they have plenty of spas, boutiques, and eateries from which to choose. Keep reading to learn more about relaxing and unwinding in Toronto.