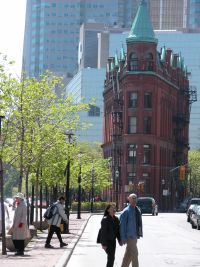 ©2006 Tourism Toronto Toronto's Flatiron Building, built in 1892, is one of the city's many historically significant buildings.

In the last few years Toronto has emerged as an architectural hotspot with major projects by noted 'starchitects' Frank Gehry, Daniel Libeskind, Norman Foster, and the highly original Will Alsop. The talk of Toronto has been Libeskind's addition to The Royal Ontario Museum, which he has imagined as an exploding crystal, five stories tall. Time will tell whether Gehry's enhancements to The Art Gallery of Ontario will have as much visual impact.

Insider's Guide: The Best of Architecture & Landmarks in Toronto

Insider's Guide: The Best of Architecture & Landmarks in Toronto

So far, the most audacious structure to be built is Will Alsop's new building for the Ontario College of Art & Design (100 McCaul St). Like a tabletop, a black-and-white checkered rectangle hovers, suspended 40 meters above ground on four colorful metal legs. Students adore it, and fans of architecture regard it as the most important building that's gone up in Toronto in the past 10 years. By any measure it's a wonderfully imaginative addition to the city's otherwise old-school architecture and a wonderful preview of what's to come.

For insight into Toronto's past, head to Old York Historic District centered around the St. Lawrence Market (92 Front St E). Heritage buildings, like the 18th century St. Lawrence Hall, the iconic Flatiron, and the cluster of cathedrals on Queen Street make this Toronto's most photogenic district.

Charming 19th century storefronts lined with flowerboxes predominate, and gems like the Toronto Sculpture Garden (115 King St W) and St. James Cathedral (65 Church St) offer a shady respite from summertime crowds. St. James was founded in 1797, as the first Anglican Church in York, as Toronto was then called. Its gothic style and its 300-foot spire make it a Toronto landmark. In the tower, a fully automated clock triggers the 10 church bells, which ring on the quarter hour.

Casa Loma (1 Austin Terrace) is a medieval castle built between 1911 and 1913. Complete with turrets, stables, a 60-foot Grand Hall, a wine cellar, a shooting gallery, three bowling alleys, and the first elevator and built-in vacuum system in Canada, it was featured on A&E's America's Castle. Kids can look for secret passageways hidden behind mahogany panels, run down a long tunnel to the stables, and climb up the turrets, which have spectacular views of Toronto and the lake in the distance.

Spadina House (285 Spadina Rd), is a grand mansion that was lived in by successive generations of the renowned Austin family, from the 1880s right up until the 1980s. With its billiards room and conservatory, Spadina House is like a game of Clue brought to life.

If you'd prefer to while away your days in Toronto by shopping, we have suggestions on the following page.