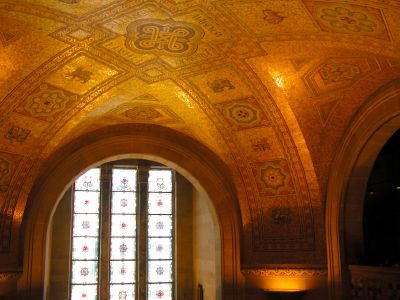 Toronto's cultural institutions have gone through a renaissance, with major expansions of The Royal Ontario Museum, The Art Gallery of Ontario, and The Gardiner Museum of Ceramic Art. The Canadian Opera Company and The National Ballet of Canada now have a permanent home in a beautiful new state-of-the-art Opera House.

But Toronto's cultural life goes on outside of these hallowed halls, along streets like Queen Street West, the domain of artists, musicians, and their bohemian hangers-on. Stroll down a few blocks of it, particularly the strip west of Bathurst Street, and you'll find intriguing artist-run galleries, cool boutique hotels like The Drake and The Gladstone, and an endless parade of shops hawking Australian boots, Japanese paper lanterns, vintage clothes, pressed tin treasures, rare estate teas, and olive oils, and much, much more.

Insider's Guide: The Best of Arts & Culture in Toronto

Insider's Guide: The Best of Arts & Culture in Toronto

Royal Ontario Museum (100 Queen's Park) is the fifth largest museum in North America with 45 galleries and excellent research departments that have brought it international acclaim. Make sure to visit the Asian galleries, which are the world's finest collection of Chinese Temple Art outside China, and extensive Korean and Japanese galleries as well. Its brand new addition, an enormous exploding crystal designed by Daniel Libeskind, is a striking addition to the Toronto landscape. Housing a spectacular atrium space with no right angles to be seen and covered in glass-sliver windows, the crystal's four levels of galleries will showcase some of the museum's finest pieces.

Art Gallery of Ontario (317 Dundas St W) features Canada's largest art collection. Alongside an impressive European art collection, including such heavyweights as Vincent Van Gogh, Pablo Picasso, and Edgar Degas, the gallery has a sculpture atrium devoted to its unsurpassed collection of Henry Moore bronzes. An extensive contemporary art collection documents the evolution of modern movements and includes works by Claes Oldenburg, Jenny Holzer, and Andy Warhol among others. An addition designed by native Torontonian Frank Gehry will be completed in 2008.

Textile Museum of Canada (55 Centre Ave) has a permanent collection of garments, tribal rugs, and textile samples from every culture in the world. It also has changing exhibits by contemporary artists whose works are inspired by textiles. You never know what you'll find here. For example, a recent show riffed on classic weaving patterns, but used beetles, butterflies, and other colorful insects to render elaborate designs on the gallery walls.

The Bata Shoe Museum (327 Bloor St W) has amassed more than 10,000 pairs of footwear and related artifacts from 2,500 BC to the present day. Since founder Sonja Bata began collecting shoes in the 1940s, pop stars, politicians, and everyday folk have all entrusted their shoes to her. When she decided to open a museum, local architect Ray Moriyama designed a cunning shoebox-like structure whose "lid" seems to be lifting off. There are neat surprises everywhere, like chestnut crushing shoes from France and platform running shoes worn by Spice Girls member Ginger Spice. Exhibits change regularly, but starting at the lower level you'll find a neat overview of the history of shoes and a sampling of extraordinary shoes that reveal the breadth of the collection.

The Toronto Centre For The Arts (5040 Yonge St, 416-733-9388) houses three theaters: the George Weston Recital Hall with 1,036 seats, a multipurpose 250-seat studio theatre, and the Main Stage Theatre with its 1,850 seats. Because of its excellent acoustics, this is the place to hear the world's best international singers and musicians.

The Hummingbird Centre For The Performing Arts (1 Front St, 416-393-7469) is municipally owned, seats 3,155 people, and is the largest multi-use facility in the country. It's home to the Canadian Opera Company and the National Ballet of Canada. Some of its most popular international touring acts have included Riverdance, Judy Garland, and Liberace. The center has a huge 60-foot proscenium and a sizable lobby mural by York Wilson.

Toronto is becoming a hotspot for architecture, centered on new projects by famous architects such as Daniel Libeskind. On the next page, we'll provide suggestions for experiencing Toronto's architecture and landmarks.