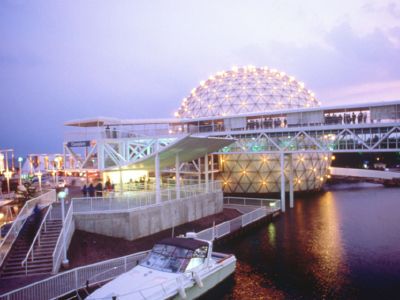 For many years, Toronto had a reputation as being safe, clean, and industrious -- positive attributes, to be sure, but not exactly the makings of an exotic and exciting vacation spot. Today, thanks in large part to the influx of immigrants from every corner of the world, Toronto has become a marvelously diverse and happening city. While it has retained its efficient way of life, it has developed a more daring, cosmopolitan side, becoming the kind of rare big city that suits both singles and families alike.

Insider's Guide: The Best of Special Events & Attractions in Toronto

Insider's Guide: The Best of Special Events & Attractions in Toronto

Every weekend from May to October, there's another nationality celebrating a holiday or another major festival kicking off. The hotspot is Harbourfront (235 Queen's Quay West), a massive cultural complex on the lakeshore. Along with open artist studios, galleries, and theatres, festivals devoted to French Canadian, Latin American, Indian, Ashkenazi, and hip-hop culture, among others, take place here regularly. Other events revolve around food, like the Hot & Spicy Food Festival, which draws aficionados for chef demonstrations and lots of sampling at ethnic food tents.

CN Tower (301 Front St W) is Toronto's tallest and defining landmark. This is the tallest freestanding structure in the city at 1,815 feet from the ground to the tip of its communications aerial. It was built to solve communications problems caused from the skyscrapers dotting the landscape in the 1970s. You can test your courage by walking across the glass floor 113 stories about the ground. The glass is only 2-1/2 inches thick, but is so strong it can hold up to 85,000 pounds. If you are more daring, go higher up another 33 floors to the Sky Pod viewing area. On a clear day you can see the spray coming off Niagara Falls, which is 62 miles away.

Ontario Science Centre (770 Don Mills Rd) has more than 600 exhibits in 10 exhibition halls in addition to visiting exhibits. You'll see a hair-raising electrical ball, lasers burning through wood, and flowers shattering into icy shards. You can't see it all in one trip, so make time for in-depth exhibits like the Human Body and The Living Earth and a larger-than-life film shown at the OmniMax movie theatre. Also save time for the new Weston Family Innovation Centre, which explores current science and technology trends.

Toronto Zoo (361A Old Finch Ave, Scarborough) is home to more than 5,000 animals that will make the young and young-at-heart feel a special place in their heart. There's a lot to see on the 710 acres, so make time for the African Savanna, the largest indoor Gorilla rainforest exhibit, the Kids Zoo with its numerous interactive stations, and Splash Island, a 2-acre water play area. You can also see some amazing animal shows in the 750-seat Waterside Theatre.

Ontario Place (955 Lake Shore Blvd W) is a futuristic entertainment complex on the waterfront of Lake Ontario. Its space-age design incorporates a series of elevated white pods, joined together by a network of wide ramps and pontoons, like a stage set for The Jetsons. It's worth spending the entire day here, enjoying the more than 20 rides and attractions, which include an IMAX Cinesphere Theatre, bumper and pedal boats, a children's play area, miniature golf, a motion simulator ride, a waterpark, and five Olympic-sized beach volleyball courts.

Medieval Times (Exhibition Place, Dufferin Gate) allows adults and especially kids to experience the 11th century with a four-course banquet. Guests walk through the door and are greeted by a King and Princess, then walk forward into the Hall of Arms decorated with authentic medieval artifacts. Silverware wasn't a luxury back then, so you'll have to eat your entire meal with your hands. The show includes ring piercing contests, javelin throwing, jousts, and horses performing military drills. Afterward, guests can go to the Knight Club to meet the show cast, get autographs, or take photos.

The African Lion Safari (RR1, Cambridge) is one hour from Toronto and is home to more than 1,000 animals of more than 100 species, but the facility is only open from May through October. Guests remain in their cars as they slowly drive past grazing giraffes, playful monkeys, exotic birds, and majestic lions in the reserve park. Another option is to leave your car in the main lot and get on a guided bus tour through the complex for an additional fee. You can also watch live animal performances, like the Parrot Paradise Show, Birds of Prey flying demonstrations, and the Elephant Swim in the recreational lake. You can also take an African Queen boat tour through the property.

The Hockey Hall of Fame (30 Yonge St) combines memorabilia with state-of-the-art exhibits and interactive technology. It's an ideal venue for an intergenerational visit: while Grandpa checks out a re-creation of the Montreal Canadiens' dressing room, the grandkids can try to stop slap shots from a virtual Wayne Gretzky or Mark Messier. Upstairs in the original bank building a more respectful calm predominates as visitors file by the many trophies, awards, and portraits of Hall of Famers. A highlight is the original Stanley Cup on display in the ornate bank vault. You can have your photo taken with it, or do as the pros do and plant a big kiss on it!

Major league sports attract huge crowds to the Air Canada Centre (40 Bay St), where the NHL's Toronto Maple Leafs and the NBA's Toronto Raptors play. Over at the Rogers Centre (1 Blue Jays Way), the Toronto Blue Jays play in baseball's American League and the Canadian Football League's Toronto Argonauts play a slightly different version of the game than is played in the NFL.

For a unique sporting experience, check out the Canadian sport of lacrosse, a fast-paced game where players pass a ball using long sticks with baskets. The game pre-dates hockey as an organized sport in this country, dating back to the 1860s. Today a professional league operates across the country, and home games featuring the local team, Toronto Rock, take place from January to April each year at the Air Canada Centre.

You can spend an afternoon watching the thoroughbred and standardbred horses race at the Woodbine Racetrack (555 Rexdale Blvd, Rexdale). It's the only track in North America that offers both kinds of horses racing on the same day. This track is known for hosting the $1 million Queen's Plate and the $1.5 million Canadian International.

One of Toronto's largest events is the Toronto Caribbean Festival, a two-week celebration that attracts over one million revelers. Based on Trinidad's Carnival, the festival now also includes the music, dance, food, and costumes of Jamaica, Guyana, the Bahamas, Brazil and other cultures represented in Toronto. The centerpiece Caribana parade is a street party packed with thousands of giddy masqueraders dressed in elaborate costumes. A grandstand seat is $21, but it's free anywhere along the roadside.

Toronto's arts and culture scene boasts several fine museums and performing arts troupes, including the Canadian Opera Company and the National Ballet of Canada. Go to the next page to learn more about Toronto arts and culture.