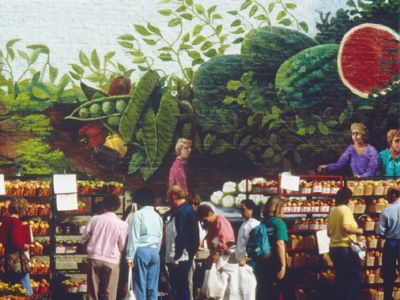 Toronto has a well-deserved reputation as a culinary destination, and every visitor to the city should graze through its two marketplaces -- the historic St. Lawrence Market and the funky, anything-goes Kensington. Both provide insight into the city's rich gastronomic scene.

Kensington Market (College St and Spadina Ave) offers an ethnic banquet of empanadas, tacos al pastor, Jamaican meat patties, Trinidadian doubles, Persian falafel, organic ice creams made with ginger, rose water and cardamom, and hundreds of other delicacies. Lively and disheveled, it's one of the least pretentious foodie scenes you'll ever come across.

Toronto's vibrant restaurant scene makes it hard to zero in on any favorites, but there are three innovators always worth experiencing. Order the spinach and rabbit dumplings or foie gras at Mobil Three-Star Susur (601 King St W). Order the lobster taco with crisp beet wrapper or rosed Dover sole in brown butter at Mobil Four-Star North 44 Degrees (2537 Yonge St). Try any of the homemade pastas and signature coconut cream pie at the Mobil Four-Star Scaramouche (1 Benvenuto Pl).

And if you feel like being spontaneous, a stroll along King Street West, between Bathurst and Spadina Streets will put you in the middle of some scrumptious choices -- among them Bistro Bakery Thuet (609 King St W), Mobil Two-Star Rodney's Oyster House (469 King St W), and Crush (455 King St W), a permanently packed wine bar.

Meanwhile, there are just as many great ethnic eateries whose exotic dishes will linger in your memory for years to come. Wonderful Greek food can be had along the Danforth -- an avenue lined with restos serving up souvlaki and spanakopita until the wee hours of the morning. You should try the moussaka and kebabs at Mobil Two-Star Patris Restaurant (888 Danforth Ave), anything tapas at Kokkino Restaurant and Lounge (414 Danforth Ave) or suckling lamb at Ouzeri (500A Danforth Ave).

The Babaluu Supper Club (136 Yorkville Ave) features a Latin American and Mediterranean menu with a Spanish influence. Try the eggplant and sesame dip with homemade plantain chips, the seared sea bass with mango salad, or dip platter with plantain, yucca, and corn chips.

The Mobil Three-Star Mistura Restaurant (265 Davenport Rd) offers contemporary Italian cuisine with a menu that changes seasonally to ensure fresh ingredients are used. Try balsamic glazed lamb ribs or cheese dumplings with mushroom ragu if you spot them on the menu.

Restaurant tipping in Toronto is similar to other big cities, with 15 percent considered the standard and 20 percent for exceptional service.

Toronto is a big city with attractions that suit all tastes. Read our suggested itineraries on the next page, which will help you make sure you hit all the hotspots.