Getting In, Getting Around Toronto 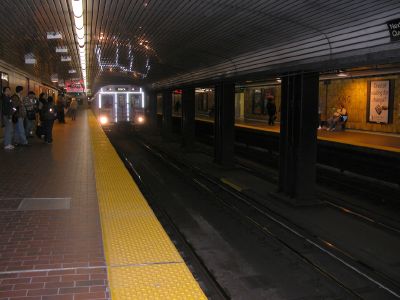 ©2006 Tourism Be sure you stay behind the yellow line when waiting for a subway in Toronto.

Toronto's public transportation includes buses, streetcars, and subways. These all are great options because driving can be dicey due to Toronto's extended rush hour. Here's our primer on Toronto transportation:

Maps and driving directions into downtown Toronto are available from car rental service counters, and are fairly straightforward. Two main routes -- along Highway 401 or 427 -- lead into downtown. Ask the car rental agent about which route is the best option for your destination. The average daily rate for a midsize car is $60 per day.

Taxis: Taxis are available outside the arrivals level of the airport, and charge a flat fee of $46 to downtown Toronto. Most taxis are large town cars and can take up to four passengers.

Public transportation: If you'd like to take public transit into Toronto, there are a few ways to do it.

Airport Express is a bus service that drops passengers off at about a dozen downtown hotels for a one-way fare of $16.45 or round-trip fare of $28.35. You can buy tickets directly from the wicket located curbside, online at the Web site, or directly from the bus driver. For an updated schedule, check the company's Web site.

The 192 Airport Rocket bus route provides all-day express bus service between Pearson Airport and Kipling subway station. Once at Kipling, take the subway into midtown to the Yonge/Bloor station. A second option is taking the 58A Malton bus to Lawrence West station. You can get directions at both subway stations for the rest of your trip, or consult the Toronto Transit Commission Web site before your arrival. Both route fares are $2.75 per person.

GO Transit, Toronto's commuter network, provides daytime bus service between Yorkdale Mall and Pearson Airport. This route costs $5.10 per passenger. From the Yorkdale subway station travelers can access the University subway line, which will take you downtown for $2.75 per person.

Overnight service is available on two routes -- the 300A Bloor-Danforth bus and 307 Eglinton West -- between the hours of roughly 2 am and 5 am. Both serve all three airport terminals and cost $2.75 per passenger.

Rush hour: One-third of Canada's entire population lives within 100 miles of the CN Tower. As in most heavily populated cities, rush hours, which are 6:30 am to 8:30 am and 4:30 pm to 7 pm, can be heavy in the downtown core and on the highways. Expect bumper-to-bumper traffic during rush hours on major roads like Highway 401, The Gardiner Expressway, and The Don Valley Parkway.

Rules of the road: When driving alongside a streetcar, make sure to stop if the doors open. Passengers exit streetcars right into traffic on many routes, and cars are required to stop until the streetcar doors close again.

Don't plan to drive to Niagara Falls on Friday night and return Sunday night -- if you do you'll probably regret it. The main route to The Falls is The Queen Elizabeth Way (QEW), which is particularly congested during summer weekends. You'd be better off avoiding driving there on weekends.

The standard fare on Toronto Transit is $2.75 per person. Children are 70 cents and seniors/students pay $1.85. If you plan on using public transit during your visit, pick up a transit map and consider buying a one-day or weekly pass to save money.

Toronto has three subway lines -- the Bloor/Danforth line, which runs east-west, and the Yonge Street and University lines, which run north-south and converge at Union Station downtown. All subways have designated waiting areas, and it's important to stay behind the yellow line on subway platforms.

Toronto streetcars run along major streets in downtown, with buses taking their place outside the city core. Streetcars operate frequently (every 5 to 7 minutes during the day) and can be boarded with a transfer obtainable in the subway stations or by paying your fare as you board. At night, buses and streetcars will allow women passengers to request stops between regular designated stops.

Taxis, by bike, and on foot: Taxis are easy to flag downtown, with fares that rarely top $15 in the city core. Meters start at $3 and are distance-based, so they increase in increments of 25 cents. A typical trip in downtown Toronto will cost $7 to $10, depending on traffic. Try not to travel at rush hour however, when long waits in traffic can send your taxi fare into the stratosphere. Make sure that the metered rate is set at one, unless the driver has explained why it isn't, such as for a large number of parcels or many passengers. Most taxis have a limit of four passengers.

There are bike lanes on certain major thoroughfares (city hall has bike maps), but cycling isn't recommended unless you're a seasoned urban rider because getting wheels stuck in streetcar tracks is a common hazard. You can combine cycling with public transit since bicycles are permitted inside all city buses, streetcars, and subway trains, except during morning and evening rush hours.

A popular place to cycle is car-free Tommy Thompson Park, better known as Leslie Spit, where abundant wildlife attracts birders from all over the city. Another choice spot is High Park, in the west end, which is car-free on Sundays. For a full day of cycling you can go from Leslie Spit to High Park along the lakeside Martin Goodman Trail, stopping at scenic points along the way.

Families can rent a quadricycle -- a unique four-seater bike -- to tour the car-free Toronto Islands. You can pedal along the island's pathways and bridges to the 1808 Gibraltar Point Lighthouse, and cruise down the 'streets' of Ward Island, where a small community of island residents live in cottages year-round.

Toronto is a safe and friendly city with a cosmopolitan side. Keep reading to learn about Toronto's special events and attractions, which will suit families and singles alike.