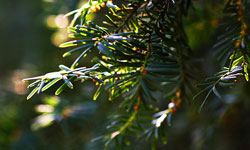 The toxic English yew tree has come to represent both death and the immortality of the soul.
Joseph Devenney/Getty Images

Given the English yew's highly toxic nature, it's fitting that the tree is commonly found growing in church graveyards across Great Britain. Some scholars believe that this tradition started when early Christians incorporated the trees -- which already had spiritual value to the pagans -- into their new religion. Today they stand not as symbols of death, but of the immortality of the soul.

The English yew (Taxus baccata) is an evergreen tree with needlelike leaves and red arils, or fleshy seed-coverings. It grows to a height of 60 to 70 feet (18.3 to 21.3 meters) and is found throughout Great Britain, but is also cultivated in the southern United States. Every part of the tree is toxic due to taxine alkaloids, except for the aril flesh. Consumption of the leaves, and to a lesser extent the seeds, can lead to increasingly serious symptoms, including dizziness, dry mouth, dilation of the pupils, weakness, irregular heart rhythm and possibly death.

Despite its harmful qualities, English yew has been used for a variety of productive purposes. Its wood was valued across Europe for bow-making as early as the Neolithic period, which lasted from approximately 7000 B.C. to 2500 B.C. Later, the Anglo-Saxons explored the tree's medicinal qualities, including yew berries in a 10th-century formula for the treatment of "water-elf disease" (probably measles or chicken pox). More recently, researchers have studied the English yew for its potent antitumor qualities. Today, yew extract is used to formulate the drug paclitaxol, or Taxol, which slows the growth of ovarian, breast and lung cancers.