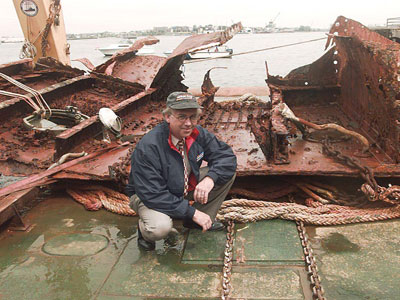 The human aspect of the Titanic tragedy continues to resonate with people, but it wasn't until the late 20th century that scientists were emboldened to actively search for the remnants of the ship itself. This quest was more challenging than many explorers initially imagined. To begin with, no one knew for sure where the shipwreck was located -- they had only records of the final coordinates of the ship from the distress calls it placed. Furthermore, no submersibles existed that could withstand the pressures exerted on the bottom of the Atlantic seafloor at an estimated depth of 13,000 feet (3.96 kilometers). Finding the ship was going to require a lot of luck and money.

In 1981, a wealthy Texas oil baron named Jack Grimm claimed to have located the shipwreck. His expedition, led with all the bravado of a cocky cowboy, turned up a massive propeller at the bottom of the Atlantic, but further scans of the area produced no more evidence. Dr. Robert Ballard, an oceanographer from the Woods Hole Oceanographic Institute in Massachusetts, learned from Grimm's mistake and planned to use sonar for reconnaissance of a wide swath of the Atlantic. Ballard developed Argo, a research submersible named for the Greek myth of Jason and the Argonauts. Argo was an unmanned submersible equipped with video cameras. It was controlled by Ballard and his crew aboard a research vessel. They could observe Argo's discoveries from the video feed and sonar it transmitted. The U.S. Navy funded a three-week long test with Argo in the summer of 1985 -- but the expedition failed.

Ballard re-evaluated his methods. He determined that it would be likelier to find the projected 2.5 mile- (4 kilometer) wide debris field left in the ship's wake rather than locating the ship itself. Using the Californian's logbooks, Ballard traced backward from the lifeboats' drifting trajectory to the location of the actual shipwreck. And his methodology worked: On Sept. 1, 1985, Ballard's team found one of the Titanic's boilers. Argo continued scanning the seafloor, and it at last revealed the ship's giant hull. Ballard's expeditions turned up more evidence with the development of Jason Junior, an even more sophisticated video camera.

These early explorations of the wreckage paved the way for future archaeologists to actual visit the shipwreck themselves. Scientists and historians alike continue to eagerly pursue and evaluate the wreckage. When they visit the site, they usually allot 12 to 15 hours -- it takes about five hours round-trip to reach and return from the ship. Most go to observe and report on the state of the Titanic. Even though the Titanic lies in international waters (about 400 nautical miles southeast of Newfoundland), RMS Titanic, Inc., is the salvor-in-possession of the ship. RMS Titanic, Inc., has recovered nearly 5,500 artifacts from the wreck. Underwater, about 6,000 pounds of pressure per square inch are exerted upon these items, and for the sake of historical preservation, scientists have deemed it necessary to excavate them from the Atlantic [source: Titanic Aquatic].

Currently, there are debates about whether the remains of the ship itself should be brought up. There's no feasible way to preserve the Titanic underwater, where iron-ingesting microbes are virtually eating it. Scientists say that in about 40 to 90 years, the brittle remains of the Titanic will implode [source: Titanic Aquatic]. It's a question of physics and ethics. Could the ship be safely hoisted to dry ground without damaging it? And if it could, should we uproot a watery graveyard?

If the Titanic itself is to be preserved, it will have to be excavated from the Atlantic. And if it were, curious museumgoers would doubtless be shocked at its state of disrepair. It's still a massive piece of steel, but rusticles, eerie sealike icicles, have attached to the hull and sway in the ocean waters from its railings. Memories of the Titanic's flawed majesty remain a vibrant piece of history, and perhaps a century from now, these memories will have to suffice.