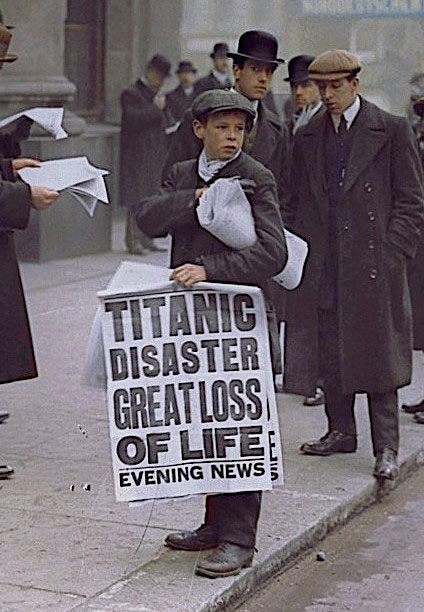 When the Carpathia arrived at the disaster site at 4:30 a.m. on April 15, 1912, it was a bleak scene. The lifeboats were adrift with no compasses or lights, and the shivering passengers in them huddled together to protect against the frigid air. Carpathia recovered 14 lifeboats and 712 survivors — though one of them died later en route to New York, the maiden voyage's final destination. By then, the world was waking up to the news that the unsinkable ship had sunk. Families with loved ones aboard the vessel were desperate for a list of survivors; it wouldn't be compiled until a week after the accident.

After it had gathered survivors, the Carpathia asked the Californian to look for bodies. The vessel reported that it found none. Historians today believe that the Californian didn't count for factors like drift and force of impact that might've carried bodies away from the site where Titanic sank. These results were unsatisfactory for the White Star Line. White Star commissioned search vessels to conduct further investigation of the area. Of these vessels, the Mackay-Bennett recovered 306 bodies, Mina found 15 and the Montmagny and Algerine came away with four and one, respectively. The crews of these ships were privy to a macabre sight — frozen, bloated corpses. The dead were so heavily waterlogged that it took a small group of men to heave each one over the side of the boats.

The recovered first-class passengers were embalmed and placed in coffins. In many instances, their frozen limbs had to be forcibly broken to fit inside. Second- and third-class passengers were swaddled in canvas bags, and some crew members were laid in the ice holds of the vessels while others were strapped to 28-pound (12-kilogram) iron rods and sunk to the bottom of the ocean. Recovered corpses were taken to a nearby port at Nova Scotia, where they were identified and buried. Identifying the bodies proved difficult; some crew members had raided cabins for furs and warm clothing, and their identities were mistaken as first- and second-class passengers. The White Star Line agreed to ship bodies back to Southampton, England, for a cargo rate; no one took the company up on its offer.

On April 16, 1912, the New York Times announced the Titanic shipwreck. The disaster impacted people the world over.
Blank Archives/Getty Images

England's King George V issued a public statement of condolence after the tragedy, and Parliament conducted the inquiry into the accident. The U.S. Senate also conducted an investigation on the basis that Sen. William A. Smith had sailed with Capt. Smith before and wanted to know how a ship under his care had sunk. Both England and the United States reached similar conclusions: The ship had inadequate life-saving apparatuses onboard, and its designers and inspectors had been negligent and cursory in their evaluations [source: RMS Titanic]. Because there were so many inconsistencies in the survivors' accounts and the witnesses' testimonies, it was nearly impossible to draw firm conclusions about the disaster. But here are some of the conclusions from the U.S. Senate's inquiry at the time:

There was no system adopted for loading the boats; there was great indecision as to the deck from which boats were to be loaded; there was wide diversity of opinion as to the number of the crew necessary to man each boat; there was no direction whatever as to the number of passengers to be carried by each boat, and no uniformity in loading them. On one side only women and children were put in the boats, while on the other side there was almost an equal proportion of men and women put into the boats, the women and children being given the preference in all cases. The failure to utilize all lifeboats to their recognized capacity for safety unquestionably resulted in the needless sacrifice of several hundred lives which might otherwise have been saved.

The Board of Trade later argued that the 26 requisite lifeboats determined to have been needed onboard a ship the Titanic's size couldn't have been lowered and filled in the amount of time the crew had to evacuate passengers. Individual cases were brought against the White Star Line for personal losses of loved ones and property; the verdicts of these are wide and varied. Some lawyers called the Titanic cases a litigation nightmare, given the discrepancies and holes in the story.

Recovery emphasis was placed on Titanic's passengers and crew; for nearly a century, the ship itself sat rusting on the bottom of the Atlantic. In the late 20th century, scientists became determined to locate the shipwreck.