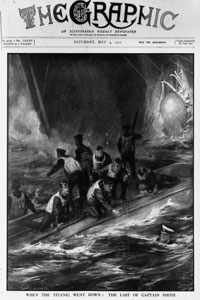 In this illustration of the Titanic disaster, Capt. Smith refuses help from passengers in a lifeboat.
Hulton Archives/Getty Images

Capt. Smith accepted that his ship was sinking, and he acted quickly to save his passengers and crew. At 12:15 a.m., he marched into the Marconi Room to order a series of distress messages. One of the vessels that responded was the Carpathia, a Cunard Line steamer. Carpathia was nearly 58 miles (93 kilometers) away and wouldn't reach Titanic before it sank. The Californian was closer to the Titanic, but the ship's wireless operator couldn't decode the Marconi signal. Smith also directed rockets to be fired every five minutes [source: RMS Titanic]. But any vessels that saw the flares couldn't traverse the dangerous ice floes to aid the sinking ship.

Because the collision with the iceberg had been so slight, scarcely any passengers were aware that the ship was in trouble. They continued their nightly rituals -- some socialized in the lounges, others relaxed in their cabins and some were fast asleep. Crew members were mobilized for action, but no formal shipwide announcement had been made that Titanic was sinking. People who heard murmurs of an emergency dismissed them; after all, the ship was unsinkable. Instead, a hushed and dire situation gradually gave way to chaos as it became clear that the ship was not equipped with enough lifeboats to convey everyone to safety.

As ocean water rose higher and higher in the ship, first- and second-class passengers were directed in droves to the highest deck. Third-class passengers were detained in the bottom decks and permitted to ascend to the Boat Deck only after the first and second classes were accounted for. Third-class steward John Hart took it upon himself to direct them toward the proper evacuation route. Many members of the third class had never ventured far past their cabins, and they got lost in the labyrinthine hallways of the ship.

While First Officer William Murdoch and Second Officer Charles Lightoller both loaded passengers in lifeboats, their strategies were a little different. Murdoch ushered as many people as possible into his boats; Lightoller permitted only women and children. By 2:00 a.m., all the lifeboats had been lowered, and half the ship's passengers and crew still remained. They strapped on their life vests as the band stoically played on: Their song of choice was "Nearer My God to Thee" [source: History Channel].

At this point, the ship's stern had risen dramatically out of the water as the bow plunged forward. It loomed dramatically at the height of a 25-story building. Thirty-one thousand tons of water had poured into the ship, and Smith officially dismissed his crew members from duty so that they could choose how to accept their fates [source: Titanic Aquatic]. Flickering lights finally gave way to darkness, and radio wires were severed as the second smokestack broke and tumbled onto the deck. At 2:20 a.m., the ship sank into the Atlantic.

All the Best-laid Plans