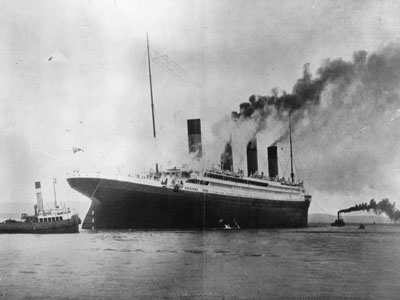 Compared to other contemporary ships, Titanic was a giant.
Topical Press Agency/Getty Images

The size of the Titanic sparked a fiery debate. Some said a ship of that size couldn't be safe; others said that a ship as large as Titanic was virtually impenetrable.

But there were many problems with the general bigness of the Titanic. For one, the Board of Trade had no safety regulations in place for a ship that size. According to the board's 1894 Merchant Shipping Act, the number of lifeboats required onboard a ship was in direct proportion to the ship's gross tonnage. But the act stopped calculating at a ship of 10,000 tons, which was beholden to carry 16 lifeboats. Titanic, which had about 35,000 tons on that figure, carried precisely 16 lifeboats [source: RMS Titanic].

Other big problems? Titanic underwent only about six or seven hours of testing. During this time, the ship's turning radius and equipment were observed, but Titanic was never even driven at its maximum speed. What's more, emergency drills required some crew members to practice lowering lifeboats, but they lowered only two of the sixteen, rendering an inaccurate estimation of time for evacuation procedures. One reason for these abbreviated tests and drills may have been that the full crew wasn't even onboard yet -- many didn't board until a few hours before Titanic took off from Southampton, and most of the crew weren't assigned official jobs or posts until they neared Cherbourg the following day [source: Titanic Inquiry Project].

This Marconi wireless message was sent from Titanic after it had hit the iceberg.
Matt Campbell/AFP/Getty Images

The ship was short on safety supplies, too. As we've seen, there were too few lifeboats, but the crew lacked binoculars and searchlights as well. And while the Marconi wireless telegraphy system onboard the Titanic was innovative, it was probably too cutting-edge to be effective: Not many people knew yet how to operate and receive Marconi messages.

Titanic was also an inadvertent bully. The churning waters left in the ship's wake were violent enough to suck a smaller steamer, the New York, into its propeller. This accident left Titanic unscathed, but the New York wasn't as lucky -- its moorings were virtually ripped off and had to be recovered. Meanwhile, unbeknownst to many passengers onboard, the Titanic was actually on fire in one of its coal bunkers. Fire wasn't enough to detain the giant ship; Titanic sailed on, and the fire was eventually extinguished. (Good thing, too, because Titanic needed all the coal it had stored on board. The ship required nearly 600 tons (544 metric tons) per day to operate.)

Should these incidents have postponed the maiden voyage across the Atlantic? Perhaps. But captain, crew and passengers alike put their faith in the sturdy giantess. The ship's brute strength and size could forestall any disaster, and that might explain why Capt. Smith discounted the ice warnings he received on the night of April 14, 1912, and instead forged ahead -- full throttle -- at the record-breaking speed of 22.5 knots.