Construction and Components of the Titanic 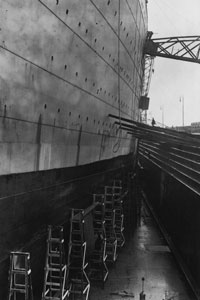 A view of the Titanic, docked in Belfast at the Harland and Wolff shipyard.
Topical Press Agency/Hulton Archives/Getty Images

The White Star Line's triumvirate of giants included the Gigantic, Olympic and Titanic. These ships shared a design plan and a common theme: bigness. J. Bruce Ismay, White Star chairman, and Lord Pirrie, chairman of shipbuilders Harland and Wolff of Dublin, estimated that they'd be about one-and-a-half times the size of the Cunard Line's largest ships [source: RMS Titanic]. Ismay and Pirrie's early sketches of the ships included two masts and four smokestacks -- the ships would only need three to function, but a fourth was added to make the design symmetrical and was later repurposed into a ventilation system. Alexander Montgomery Carlisle was named head designer of the project, a position later handed over to Pirrie's nephew Thomas Andrews.

To build a safe ship 882.5 feet (268.8 meters) long and 92.5 feet (28.2 meters) wide with a gross weight of nearly 45,000 tons (40,824 metric tons), some innovative shipbuilding techniques and materials were required [source: RMS Titanic]. John Brown's shipbuilding firm obliged Ismay and Pirrie with steel and turbines. The Parson's turbine was an essential development in the construction process -- it operated off the exhaust steam produced by the ship's two reciprocating engines, which were nearly four stories tall. This arrangement, combined with two three-blade propellers measuring 23.5 feet (7.2 meters) in diameter and a four-blade propeller of 17 feet (5.2 meters) located near the ship's rudder, produced enough horsepower to attain speeds up to 24 knots [source: Halpern].

The ships required an immense amount of power, and these powerhouse compartments were located in the hull of the ship. A turbine room, an engine room, six boiler rooms, 11 stokeholds and rooms for heaters and refrigeration equipment were separated by bulkheads -- reinforced partitions. Another innovation aboard the ships was watertight doors that could be dropped automatically or by manual controls. Thomas Andrews' theory behind these watertight doors was that they could close off flooded compartments in case of emergency. He designed the ships to stay afloat with two of the 16 compartments flooded; the ship could even manage to sail on with up to three or four water-filled compartments. Above the machinery in the hull, decks lettered A through F contained everything from cabins and dining halls to Turkish baths. (We'll read more about those decks in the next section.)

There was a catch to these grandiose plans, however: No construction arena or launching site could accommodate the ships. So before the ships could be built, the White Star Dock and the Great Gantry were. The Great Gantry was a series of 10 cranes that could lift laborers and materials to the height of the deck to which they were assigned to build. The Olympic was built first and completed by 1911, and the Titanic was completed in 1912, after the construction efforts of nearly 11,000 men [source: RMS Titanic].

Next, we'll look at the structure and interior design of the Titanic.