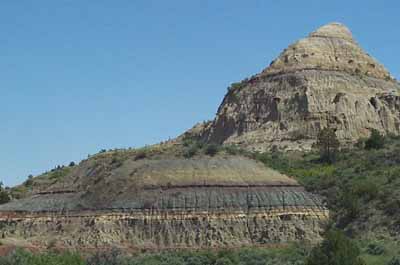 When Theodore Roosevelt's wife died on the same day as his mother, he believed he needed to embrace nature if he was ever to move beyond his grief. The young member of the New York assembly headed west to the Dakota Territories and bought a cattle ranch.

The time was the 1880s, the same period when a cowhand named Charlie Russell was beginning to paint the landscapes and people of the cattle country in nearby Montana. The war between the Dakota tribe, or the Sioux, as they are better known, and the U.S. government had just ended. At that time, the American West was at a crossroads. Cattle ranchers were rapidly claiming the open grasslands, the old buffalo prairie that extended from Canada to Mexico.

Today, Roosevelt's Elkhorn Ranch on the Little Missouri River of North Dakota is protected as a national park, Theodore Roosevelt National Park. Visitors can still see herds of white-tailed deer, elk, antelope, and buffalo, which Roosevelt (an avid big-game hunter) witnessed more than a century ago. Best of all, the park protects some of the best multicolored badland formations in the region, as well as extensive surface beds of petrified wood.

Toward the end of his life, Roosevelt observed that he would never have become president had he not spent a few years out west on his beloved Elkhorn Ranch. He had become a dedicated conservationist who went on to do more for our national park system than just about any politician before or since.

In the fall of 1883, when he first came to the area, Roosevelt purchased a small herd of cattle to run on the Maltese Cross Ranch. The next year he bought the rights to another ranch 30 miles away. He called it "Elkhorn" and always thought of it as his true home in North Dakota, while the Maltese Cross remained the center of his cattle business.

During 1885 and 1886, his ranching operations were quite successful, but during the bad winter the next year he lost 60 percent of his herd. At about the same time, the town of Medora began to decline. Roosevelt, newly married and involved in politics, gradually withdrew from the cattle business. The buildings at the Elkhorn Ranch have long since disappeared, but markers indicate where the ranch house stood. Few places yield a greater sense of Roosevelt during his western years.

The impact of Roosevelt's North Dakota experiences was powerful. As president, he established three national parks, helped found the U.S. Forest Service, and set aside millions of acres as national monuments.

How the North Dakota Badlands Were Formed

The history of North Dakota's badlands and prairie goes back at least 60 million years. As the Rocky Mountains rose up over the Great Plains, streams began to erode the peaks, carrying their sediment eastward and spreading mountain debris over the plains.

Later, although still a few million years ago, the entire great plains were lifted up, and the Little Missouri River began to carve its badlands. The river's many small tributaries reshaped nearby areas.

The result of this continuous process of erosion by water is spectacular. There are wildly corrugated cliffs, twisted gullies, and rugged pinnacles. Dome-shaped hills, with layers of rock and sediment forming colored horizontal striations, run for miles and miles.

This wild region is the same today as when Theodore Roosevelt described the place as "a chaos of peaks, plateaus, and ridges."

Theodore Roosevelt played a large role in making the national park system it is today. It's fitting, then, that his name is attached to an area in North Dakota that meant so much to him.