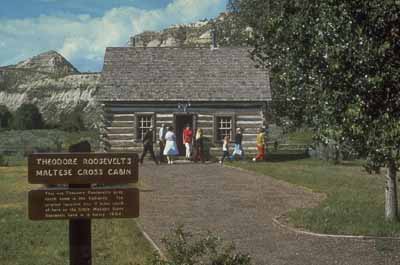 ©2006 National Park Services The rustic cabin that served as the headquarters of Roosevelt's Maltese Cross Ranch is now used as a visitor center.

Theodore Roosevelt National Park is uncrowded land, far removed from large urban centers. It is a place where visitors can experience the West and get used to lovely solitude in much the same way that young Teddy Roosevelt must have more than a century ago.

The park is divided into two units about 50 miles apart. The park headquarters is in the town of Medora in the South Unit. Rich in the history and lore of the frontier, Medora was founded by a French nobleman and former cavalry officer, the Marquis de Mores, who named the town after his American wife, the daughter of a wealthy New York banker. The couple's 26-room prairie chateau broods over Medora from a bluff across the river -- silent testimony to a place and age rapidly receding into the depths of time.

In sharp contrast to this grand house, the visitor center is located in the rustic cabin that was once the headquarters for T.R.'s cattle operation, the Maltese Cross Ranch. The cabin has been moved from its original site seven miles south. Roosevelt lived in the cabin in 1884 and 1885. From the Medora Overlook above town, visitors view the town as it might have appeared in Roosevelt's day.

If the South Unit is more historic, the North Unit may be more scenic and wild. Smaller and less closely associated with Roosevelt, the North Unit contains most of the park's wilderness. This part of the park gives visitors the feeling that they have entered an earlier era.

Here, the Little Missouri winds its spectacular course through rugged badlands where the cliffs seem higher, the canyons deeper, and the colored striations on the eroded rock more pronounced than elsewhere in this vast prairie wilderness. Oxbow Overlook provides a fine view of the Little Missouri River; it is a stunning vista with the blue river cutting through extensive badlands on either side.

Longhorn steers were brought to the park to commemorate the countless thousands of longhorns that were driven from Texas to the nearby Long-X ranch more than a century ago. They graze on the sagebrush flats in this place where the Old West still seems very much alive.

From North Dakota's badlands to the historic sites that were owned and occupied by Teddy Roosevelt, the park has plenty of photo opportunities for professionals and amateurs alike. Here are just a few:

©2006 National Park ServicesThe Little Missouri River and its tributaries have been carving North Dakota's badlands -- which Theodore Roosevelt once described as "a chaos of peaks, plateaus, and ridges" -- for millions of years.

On the next page, learn why and how Roosevelt settled on this land and when it became a national park.