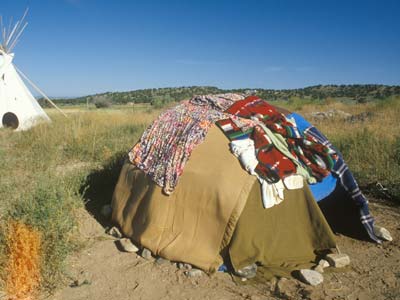 Let's say you're a wet rag. Not only that -- ­l­et's say you're a dirty wet rag, a rag that was used to clean the grime off the rims of a car. If someone picked you up and twisted you really hard, y­ou'd release a rain shower of water. And, along with that water, would trickle grime. That's kind of what it feels like when your body breaks a good sweat. It's dirty business, but when it's all said and done, you feel cleaner, fresher, newer. You feel as if the grime has been wrung from your body.

The desire to "sweat it off" is no new thing. Throughout history, humans have found ways to sweat out their demons, and sweat lodges are just one example of that fact. In the United States, sweat lodges are largely associated with Native American tradition. But they've been seen in cultures around the world. Ancient stone buildings in Ireland suggest they appreciated the benefits of sweating -- same thing in rural China, Russia and Mongolia, and the Polish make use of sweat lodges in folk medicine. The oldest sweat lodge evidence dates back to 5 B.C. It appears that the Scythians, a nomadic group that populated today's southern Russia, constructed sweat lodges from poles and woven cloth.

Cultures use sweats for a variety of reasons. Within the Native American culture, sweats may be used to give thanks, to cleanse, to heal, to celebrate or to mourn. Some tribes use sweats to seek wisdom and counsel or to elicit visions. Historically, Native Americans believed that the sweat had sacred properties. For this reason, many of the Christians that arrived in America forced the Native Americans to abandon their sweat rituals. Although some tribes totally gave up the practice, others, such as the Crow, held on to their traditions of sweating.

­Sweat lodges are similar in some ways to saunas. Rocks generate heat in the room, and added water creates steam. But while people may limit their sauna time to 20 minutes, it's not unusual to spend several hours in a sweat lodge. Some people think the ceremonial aspects of the sweat lodge experience make it easier to endure the heat for longer. But that's not always the case for everyone.

Will you overheat? Is it good for your health? So many questions.