Surviving a Summer Night in Alaska 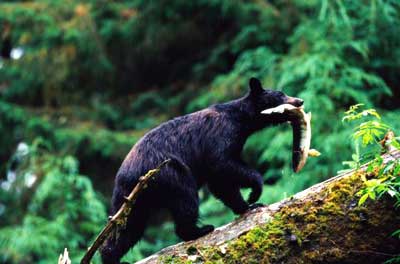 Don't camp out by a salmon stream because these are feeding grounds for bears in Alaska.
Riccardo Savi/Getty Images

While the winter cold and wet chill to the bone, the summer season in Alaska offers its own menu of obstacles for surviving the night. When the snow begins to disappear, bears emerge from hibernation, glacier melts causes water levels to rise and the air thickens with black swarms of airborne pests.

Sleeping through a summer night in Alaska poses a challenge simply because the darkness lasts only four to six hours in the south. The northernmost region runs on a never-ending light bulb with daylight illuminating the land in 24-hours cycles. This continuous light can throw off your internal clock, or circadian rhythm, that naturally responds to nighttime darkness by inducing the desire to sleep. Adequate shelter that blocks out sunlight and protects you from harmful rays will help you catch a few winks and save energy.

If you're spending the night in areas where you've seen bears or bear tracks, take special care selecting a shelter location so you don't wake up to the furry face of a grizzly or black bear. Around 40,000 bears roam Alaska. Most live in the southern areas of the state. Chances are, bears won't seek you out, but you may accidentally attract them.

First, set up shelter in an open area, not dense woods, to give you visibility. Don't camp out by a salmon stream since bears feed on them. Also, if you're lucky enough to have food along for your wilderness slumber party, keep it away from your shelter and from a bear's reach. Try to hang it about 100 yards (30 meters) away from your sleeping quarters at least 30 feet (9 meters) high. In case you have extra clothing, pack the ones you wore while cooking with the food, since the lingering scent may draw bears to you as well.

As the Alaskan summer climaxes in June, so do buzzing clouds of black flies, mosquitoes and no-see-ums. You'll find the highest concentrations of these in wooded areas. They are less prevalent in higher, dry land. To guard against these nuisances, tuck pants into socks, wear a hat and stay dry. No-see-ums in particular can drive people wild with discomfort, since the flies are good at finding open flesh and leaving you with an itch that lasts for a week.

Regarding the weather, the farther south you are in Alaska, the wetter it gets. The southeastern region receives an average 54 inches (137 centimeters) of rain annually. When building a summer shelter near a river or stream, stay aware of the water level. Melting glaciers during the summer cause these waters to rise, meaning that you could be flooded out of your temporary home. If it rains, this could contribute to flash flooding, and you don't want to wake up to that.

Surviving a night in the Alaskan wilderness involves special considerations. But remember that you'll likely be found in a few days. To learn more about how to tough it out in the wild, investigate the links below.