How Long Can You Survive Adrift in the Ocean? 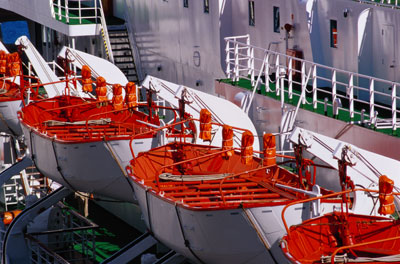 Cruise ship life boats are large, stable and give you a good chance at survival. Unfortunately, they're never invincible. Check out pictures of the most famous shipwreck, the Titanic.
Donovan Reese/Getty Images

If you've ever been scuba diving, ­then you know that just a­bout the scariest thing possible would be to surface and find that you've been left behind by the dive boat. And­, t­here you are, bobbing in the middle of a lonely ocean, feeling like shark kibble.

­As dreadful as it sounds, it actually happens. In 1998, Tom and Eileen Lonergan were left behind by their diving party after diving off the Great Barrier Reef in Australia. Although their bodies were never found, investigators believe that the pair survived through the first night. A nearly faded message written on an underwater, magnetic dive slate was found floating 100 miles from they were stranded. The message read:

The wetsuits and life vests that eventually washed ashore indicated no violent, shark-mangled end for the couple. Chances are, they succumbed to dehydration and exhaustion before drowning. In 2003, a film called "Open Water" was made, based loosely on this incident. The couple in that film met a grizzlier end -- in jaws of sharks.

Another diver named Paul Lucas drifted too far out to sea in January 2000 and found himself stranded in open waters. Luckily for Lucas, he found an island after spending 24 long hours floating in his wetsuit. After a 15-hour stay on the island, Lucas was rescued. He was exhausted, sunburned and dehydrated, but otherwise fine.

Being adrift in a boat is another story. A 62-year-old man named Richard Van Pham lived for nearly four months in his 24-foot (7-meter) sailboat after high winds broke his mast and sent him drifting out to sea. He was all set for a quick trip from Long Beach, Calif., to Catalina Island 23 miles (37 km) away, but it turned out to be anything but. Van Pham collected rainwater in a bucket and ate fish and seagull to survive over the course of the next 15 weeks. All things considered, he was found in pretty good shape.

So how long can you survive adrift in the ocean? Well, it depends on the conditions and what kind of vessel you're in, if any at all. In this article, we'll look at three likely scenarios and explore some of the dangers you'd face in the wide-open ocean. 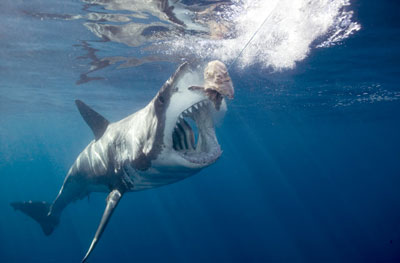 There are many hazards in the ocean if you're sailing or power boating in perfectly soun­d vessels. If your boat was suddenly rendered useless or capsized, and you had to make do in a life raft, those dangers increase while your chances of survival decrease. Here are the three things most likely to give you trouble:

Dehydration: This is going to be your biggest foe. Chances are, if you're stranded in a boat, life raft or just floating in your wetsuit, you won't have a large amount of fresh drinking water stowed away, if any. And, drinking seawater is never a good idea. Most doctors agree that humans can go four to eight weeks without food as long as they have water [source: professorshouse.com]. In hot conditions with no water, dehydration can set in within an hour. We lose water in many ways -- through sweat, feces, urine and even breathing. This water needs to be replaced if our organs are going to continue to work properly. If you're in reasonable shape and adrift in ideal weather conditions, you may be able to survive for three to five days without any water at all. You can read more about the symptoms of dehydration in How long can you go without food and water?

Hypothermia: Unless you're in the Caribbean, chances are you'll be in some pretty cold water. For this reason, hypothermia is another thing to watch out for if you're adrift at sea. Hypothermia is when your body loses more heat than it produces and your core body temperature drops. If your boat went down, you're probably going to be wet, even if you managed to make it into your raft. Getting wet will speed up the symptoms of hypothermia. To combat this, dry yourself as soon as possible. Cover up with anything warm -- blankets, sleeping bags or pillows. Most heat is lost through your head, so cover it first. If you're with someone and you suspect hypothermia has set in, keep them horizontal and calm -- reassure them that they're going to be fine. Get into a sleeping bag together or simply hug to create warmth. You can read more about hypothermia and its symptoms in How to Avoid Hypothermia.

Sharks: If you've made it through starvation, dehydration and hypothermia, you still need to worry about sea creatures, especially if you're floating in a life vest or wetsuit. Sharks don't mean any harm, but if they're hungry they may mistake you for dinner and take a bite. You may be able to fend off a shark if you punch it in its nose area, gouge its eyes or pull its gills. Of course, if you're floating neck-deep in the ocean, you'll probably be pretty exhausted, and unfortunately the probability of fighting off a hungry shark isn't too great. But there's always a chance these defensive techniques could work, so it's worth a try. If you're in a life raft or a disabled boat, do your best to stay in it. You can read more about shark defense tactics in Can I survive a shark attack by gouging out its eyes?.

On the next page, we'll look at three different open water scenarios and determine how long you might be able to survive each one. 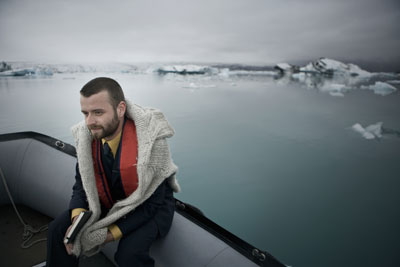 Proper attire is important in a survival scenario -- a suit, tie and cardigan wrap will keep you nice and warm.
Smari/Getty Images

There are many variables that determine how long you can survive adrift at sea. Aside from the basic scenarios, there are myriad other factors to consider, i­ncluding your physical condition, supplies you might have on hand and good old-fashioned will to live. Posing a theory on how long someone could live is very much dependent on the specifics of the situation. We can talk in generalities though and break it down into the following basic scenarios:

Boat: If you have a stash of food, some fishing equipment and some fresh water, you can survive for a long time on a boat. People have been known to survive for months adrift at sea in a boat that's still sound. If it's cold, you have overhead cover that will help keep you dry and blankets to keep you warm at night. This means you should be able to stave off any cold weather illness, like hypothermia. If it's hot out, you can use the same coverage for shade and avoid heat stroke and sunburn. If you don't have much fresh water, you can fashion a rainwater collection system with a tarp or raincoat that runs into a bucket. Or just place buckets out during rainy weather. Drink at least a liter of water a day, fish a little and you can live for a long time adrift at sea. Of course, storms can always capsize or sink your boat, but other than that, just think of it as an extremely slow sailing trip.

Life raft: Being adrift in a life raft is like being in a boat -- you just have a greater chance of sinking. Life rafts can be punctured, ripped, leaky or simply defective. The good news is that modern lift rafts are thoroughly inspected, pretty durable and come with a lot of bells and whistles to help you survive. They can range from smaller two-person rafts to large 16-person models. A top-notch raft comes with any combination of the following:

A good life raft is pricey, with a deluxe four-person model ringing up at about $4,000 -- but it's worth it. As long as the raft stays afloat and you have some luck collecting water, fishing and keeping dry and warm, you can survive adrift in a raft just as well as on a boat.

In the drink: If you're actually in the ocean like the couple from "Open Water," then you have your work cut out for you. Hopefully you have on a wetsuit and an inflatable safety vest. This will keep you floating and somewhat visible to rescuers. But you won't be able to collect water, and drinking sea water will only dehydrate you. Fishing isn't a reality either. If you're in cold water, you have a good chance of getting hypothermia, so pull your knees to your chest and hold them to retain heat. This is called the H.E.L.P. -- Heat Escape Lessening Position. Assuming you're in warm waters and wearing a wetsuit and life vest, you could potentially survive for as many as three to five days, at which point you'll most likely succumb to dehydration. That is, unless a shark gets you first.

Can you really escape an alligator if you run in a zigzag?
10 Threats You Should Never Try to Outrun
The Heart-breaking End of Legendary Adventurer Sir Ernest Shackleton