What natural weapons could I find in the wilderness? 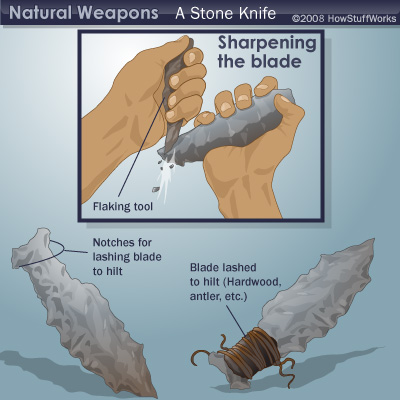 Use a flaking tool to refine the edges of your knife before you lash on a hilt.
2008 HowStuffWorks

Since you won't find duct tape lying around in the wilderness, you'll have to make your own binding material to complete your knife and other weapons.

Animal tendons are the strongest natural rope you can find in the wilderness. After skinning a dead animal, remove the sinew and lay it out to dry. Once dried, smash it to break the tendons into individual cords. To fortify the strands, twist two groups of them in a clockwise direction. Then gather the two bundles at the top and twist them around each other counterclockwise. Rawhide and strings of plant fiber from the inner bark of trees can also stand in as lashing material.

Now that you have rope handy, bind a wooden or bone hilt to your knife, a process called hafting. Cut an indentation into the end of your hilt where one end of the blade will fit. Holding the hilt and blade together, use your rope to bind them securely.

You can also assemble a weighted club for hammering and bludgeoning slow animals, such as possums, porcupines and rodents. With your knife, whittle out a V-shaped notch in the top of your club or find a sturdy stick with a forked end and put a round rock in that space. Use your handmade rope to tie it in place.

You can make a club with a rock and a split stick.
2008 HowStuffWorks

If you'd prefer to imitate David and Goliath, make a sling, which can strike faster small game like rabbits and foxes from farther distances. From the shirt on your back, tear off a piece of cloth large enough to hold an egg-sized rock. Attach about 6 inches (16.24 centimeters) of cord to each side of the cloth. Put a rock in the cloth pouch and, holding both ends of the cord in one hand, swing the sling around your head like a lasso. Once the sling gains momentum, release one end of the string, letting the rock fly out in the direction of your target.

A similar weapon, called a bola, produces a three-pronged offense. Gather three rocks and three yard-long (one meter) lengths of rope. Wrap the end of each length of rope around one rock. Then tie the three ropes together into one knot. Holding the bola by that knot, swing it around your head and release it when correctly aimed.

Or, summon your inner Hercules, archer hero of Greek mythology, and create a bow and arrow, which will allow you more precision in farther distances to ward off dangerous animals or slay one for dinner. One of the oldest weapons in human history, the simple stick and string can become your most efficient defense. To become a stealth Robin Hood in the wilderness, select a strong but pliable branch. You'll want a four-foot-long piece (129.92 centimeters) from a tree such as hickory, oak, cedar or birch.

Gently bend it to find its natural curvature. Following that curve, whittle it out into a slender arc shape, with the center as the widest part, about 2 inches (5 centimeters) across. Carve notches on each tip where the bowstring will attach. Rawhide works best for the bowstring. Stretch it taut and tie it securely at the notches. Then rub the wood with animal fat to keep the bow limber.

Arrows should be half the length of the bow, or about 2 feet (0.6 meters). To create arrows, find the straightest sticks possible and smooth down their surfaces with your knife. For an arrowhead, a sharp bone splinter or stone works well. Score one end of the arrow and insert the arrowhead, hafting them together with your lashing material. You can add feathers to the opposite end of the arrow -- called flighting or fletching -- by splitting the wood and sliding them in place, but it isn't necessary.

With a little ingenuity and safety in mind, you can make more wilderness weapons to help you survive. For more information on survival safety, read the links below.

A Word of Warning

Except in emergency situations, killing animals in the wild without a proper license is often illegal. Injuring an animal without killing it makes a dangerous animal. And wielding any type of weapon carries a risk of injury as well. Please regard this article as informational only, not to replace formal training.