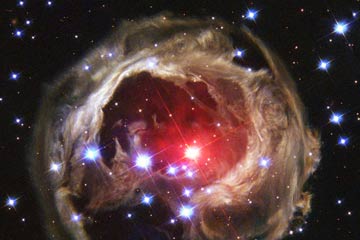 The star V838 Mon's outer surface suddenly expanded so much that it became the brightest star in the entire Milky Way galaxy in January 2002. Then, just as suddenly, it faded.
NASA

When a damaged bow forced Steven Callahan out of a sailing race in 1982, his problems were just beginning. He docked for repairs, headed back into the Atlantic alone, and hours later his boat was smashed by a surfacing whale. He abandoned the sinking ship for a raft about 450 miles (724 kilometers) west of the Canary Islands [source: Jones].

Callahan survived a staggering two-and-a-half months at sea, lost, but not completely so: In the 77 days before a fishing boat spotted him near the Caribbean Islands, he tracked his movements and positions using the sky. Using three pencils tied together, he tracked his course over 1,800 miles (2,897 kilometers) and was only off by one degree [source: Thaler].

It's what sailors have been doing forever. Navigation requires landmarks, and in the open sea, the landmarks are celestial – sun, moon, planets, and stars. Before GPS, before the sextant, before even the compass, those who ventured across oceans found their way by looking up.

At night, they used mostly stars – individual stars and larger constellations with known positions in the sky and in relation to one another [source: Smith]. Sailors and other navigators tracked them out of necessity. The ancient astronomers who started mapping them at least 5,000 years ago did it out of love [sources: Sloan Digital Sky Survey, Thaler].

Star navigation is actually pretty straightforward, on a clear night, if you know what to look for. Stars are navigational landmarks because they're constants. Sure, they appear to move as the Earth rotates, but their actual positions and their orientations with regard to other stars never changes. So if you can see them, they can point the way. All you need is your eyes, your brain and your body to get a pretty accurate reading on where you are and where you're headed. Tools like compasses, sextants and maps make it easier and more accurate; GPS receivers make it mindless. Why bother, then, learning the natural approach?

Because compasses break. Maps get lost. GPS receivers malfunction – or just get it wrong.

But mostly, perhaps, because the universe is a great, mysterious code you can solve the tiniest bit by solving the stars.

So, you're in some desert. All is sand and sky. You need to move. It's nighttime. What do you do? 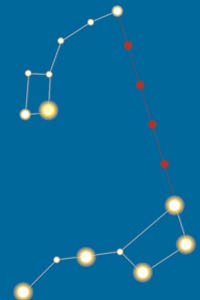 To find the North Star (top right), follow the two stars at the end of the bowl of the Big Dipper (Plough) constellation.
D'ARCO EDITORI/De Agostini Picture Library/Getty Images

First, we'll cross our fingers that this nameless desert is in the Northern Hemisphere. You can certainly navigate without the North Star; but having a single, bright, easily identifiable light that never "moves" and sits precisely above true north is a significant asset.

The North Star, or Polaris, is a fixed point. It sits above the North Pole, aligned precisely with Earth's axis of rotation, so unlike every other star in the sky its apparent location never changes [source: Gooley]. Once you find the North Star, which is pretty easy to do, you need only draw a line directly down to the horizon to find true north.

Two star groupings point the way to the North Star: the Big Dipper, aka the Plough (in the constellation Ursa Major) and Cassiopeia. Throughout out most of the Northern Hemisphere, neither one ever "sets," or dips below the horizon, so they're reliable indicators at any time of night [source: VanHaren].

The North Star lies about midway between these star groups; either can lead you to it. The Big Dipper is easier to use, though, because of the alignment of its stars.

The Big Dipper comprises seven bright stars that form the shape of a ladle (or dipper). The most important stars are the two that mark the outside edge of the scoop, farthest from the tip of the handle. These are the pointer stars: If you draw an imaginary line from the bottom-edge star to the top-edge star and extend the line about five times the distance between the pointers, you smack right into the recognizably bright North Star [source: Gooley].

Sitting on the other side of the North Star is Cassiopeia, whose five stars mark the five points of the letter W." The center star is the pointer. If you draw a line from that star in the direction of the W's top points, at 90-degree angles from each of the bottom points, the first bright star your line touches is Polaris.

Once you know Polaris, you know north. Turn 90 degrees clockwise to go east, another 90 to go south, and a final 90 to head west.

The North Star's location above true north makes establishing directions rather simple, but direction only gets you so far. For it to help you get home, you need to know which way home is. If, for example, your boat sinks, and you know the nearest land is a few hundred miles east, then you can head your raft in an easterly direction.

But what if you're in the Southern Hemisphere? There's no "South Star" to guide you, but there's something close to it.

Finding South: Start with the Cross 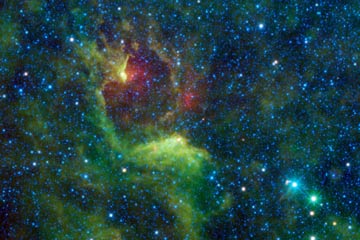 In the Southern Hemisphere, you can't see the Big Dipper [source: National Geographic Education]. Not that it would matter if you could, because you can't see the North Star, either. Were there a corresponding Southern Star, navigating below the equator would be as easy as navigating above it. But alas.

To find south, look for the Southern Cross constellation, also called the Crux. The Crux, along with two nearby stars, will reveal the general vicinity of true south.

The Southern Cross is a group of five stars in the Milky Way that, with its "dots" connected, takes the form of Christian cross. The way to distinguish the Cross from other star groups is by its pointer stars – the brightest stars in the nearby constellation Centaurus. If you spot a possible Cross, scan its immediate surroundings for two very bright stars. An imaginary line connecting the pointer stars to the Southern Cross will intersect the Cross's top star.

Once you've got the Cross, with an imaginary line forming its upright, erase the imaginary line through the pointers and draw a different one, this time running between the pointers at a 90-degree angle to each. Keep drawing until it intersects the line you've drawn through (and beyond) the upright. That point of intersection is a good estimation of the location in the sky above the South Pole, or true south [source: Wilderness Survival Skills].

Direction is a key factor in navigation, but locating the stars above true north and south serves another purpose, as well – an arguably more important one for the truly, completely lost. For this one, though, regardless of hemisphere, you haven't got all night.

Finding Latitude: Use Your Hands

Both polar (or, in the South, near-polar) locations can be used to find latitude, which indicates one's north/south distance from the (east/west-running) equator. Latitude is measured in degrees, referencing the 360 degrees that is the entire Earth.

Together with longitude, which measures east/west distance from the (north/south-running) prime meridian, latitude can tell you where you are on the planet, even if all you can see is sandy desert.

To determine latitude in the short windows of twilight, you need to find the angle of elevation of a polar star. This calculation requires three points of reference: a polar star, a horizon and you. Once you have these three points, you'll draw two lines – one from you to the star, and one from you to the horizon. The angle formed at the intersection of these lines is your latitude.

There are manual tools that make the calculation easier, and more accurate. The sextant is probably the most well-known. Invented in the 1700s, it uses mirrors and a moveable arm to line up any two objects and determine the angle between them [source: Beyond the Map]. And yet, without a sextant, without even sticks, you can still get a pretty good fix on it.

At twilight, find the polar star, let's say the North Star, and the horizon, and draw an imaginary line connecting them. Extend your arm toward the horizon, and make a fist. Your knuckles should be facing outward. Then, fist over fist, count how many of your fists it takes to get from the horizon to the North Star. Each fist-length measures approximately 10 degrees. Let's say it takes three fists. You now know your latitude is around 30 degrees N.

Latitude, of course, is only half the positional equation. It's nice to know your desert is 30 degrees north of the equator, but the equator circles the entire planet.

You need longitude, too. And longitude is tricky.

The Orion constellation in the Northern Hemisphere can help find direction, too. Orion's Belt, recognized by its three bright stars all in a line, always runs east and west. 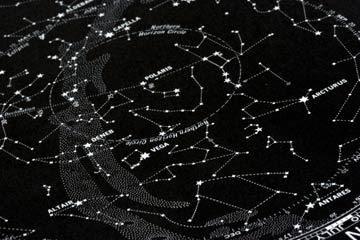 Latitude can tell you how far north or south you are. With repeated measurements, it can confirm you're travelling in a straight line, not in circles. Latitude alone, however, can't tell you where you are on the planet. You need longitude as well.

Longitude is your distance (in degrees) east or west of the prime meridian, and finding it is a difficult proposition for celestial navigators. Calculating longitude requires knowing the Greenwich Mean Time (GMT), and you can't find that using the stars. You need a very accurate timekeeper called a chronometer. (At Greenwich, England, the prime meridian is 0 degrees. If you know, for instance, that it is 7 a.m. in Greenwich when it is noon where you are, then you know you are 75 degrees east of Greenwich -- multiplying 5 times 15 degrees. The Earth turns 15 degrees per hour or 360 degrees in 24 hours) [source: Nova].

Longitude-wise, what the celestial navigator can achieve is a very rough approximation of east/west progress. By tracking the position of an east/west-setting star at the exact same time every day (assuming you have a watch), you can get a rough idea of how far you've traveled east or west [source: Thaler].

Ideally, though, in the days of GPS, and countless mapping apps, you won't need that much luck. Unless you're stranded in a desert or your boat sinks in the open ocean after being struck by a whale, star-based navigation is more a curiosity than a way to accurately navigate the globe. For most modern navigators, mastering the technique is primarily a path to a deeper understanding of the universe, the relationships between celestial bodies, and the relationship between those celestial bodies and you.

Author's Note: How to Use the Stars to Find Your Way

While in most cases, star navigation is more a hobby than a tool in modern times, I learned in the course of my research something at once reassuring and a little alarming: Even now, your airplane pilot and cruise-ship navigator learn the art. Should their instruments fail, they can find their way the old-fashioned way. Good to know they have a back-up. Frightening to know they might have to use it.