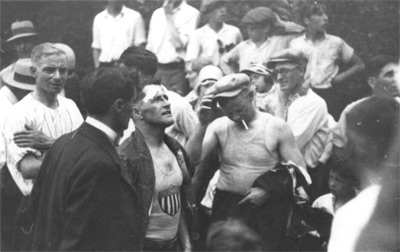 Rather than face Horseshoe Falls in wood or steel as the previous daredevils had done, Jean Lussier spent his life savings ($1,500) on a large rubber ball that would protect him during the ride and on the rocks below. Jean Lussier lived in Quebec until he was 16 and then moved to New Hampshire so he could learn English. When he was 36, he heard about Charles Stephens' attempt at the Falls and was intrigued enough to want to give it a try himself.

With the help of the Akron Rubber Company, he built a 6-foot (1.8-meter) rubber ball that was lined with steel bands and 32 inner tubes to act as shock absorbers. The open center section, where Jean was to ride, had an air cushion and valves hooked to air tanks that would provide him with 40 hours of oxygen in the event he was trapped under water. "The Ball," as it was called, also had 150 pounds (68 kg) of hard rubber in its bottom for ballast.

He made his journey on July 4, 1928, and survived. The ball's ballast was ripped off before he even went over the Falls, and several of the inner tubes ending up bursting, but he remained relatively unscathed.

Another seeker of fortune, he sold pieces of his famous rubber ball as souvenirs and even resorted to selling pieces of rubber tires once the real thing was gone. He made plans, years later, to build another, much larger ball and go over American Falls, but he never saw this plan to fruition.