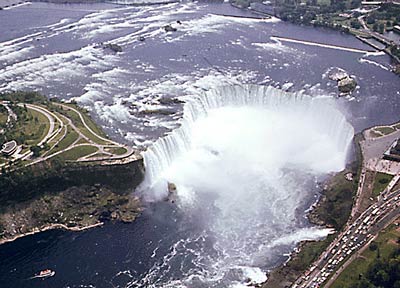 All daredevils have gone over the Horseshoe Falls rather than the rockier American Falls. You can see why when you compare the photos below -- note the rocks at the base of the American Falls.

Still, the force of the water and the rocks at the base of the Canadian Horseshoe Falls is no cake-walk. One recent theory of why some Niagara daredevils survive and some don't is offered by Paul Gromosiak, a Niagara Falls historian. He has a theory about "water cones" -- water pressure that builds up into a sort of "bubble" that then cushions the fall. Another theory is suggested by Joseph Atkinson, a professor in the Department of Civil, Structural, and Environmental Engineering at the University of Buffalo. Atkinson thinks it's more likely, at least in the case of the most recent Falls survivor, Kirk Jones (we discuss Jones in a later section), that survivors simply rode the water like a body surfer. He compares it to falling down a slope rather than splattering on a flat surface.

Others have theorized that getting into the water at the right spot upstream (usually close to the shore) and going over the brink at the right spot are also key, along with having good cushioning to absorb shock in the craft you ride in.