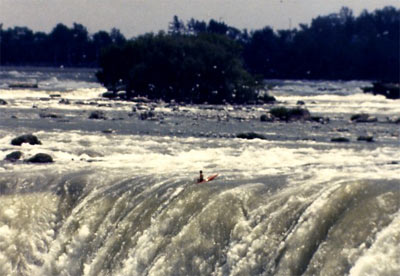 In 1990, Jesse Sharp was 28, unemployed, and an accomplished kayaker from Ocoee, Tennessee. Jesse had trained by running falls in the Smokey Mountains. He wanted to get into a stunting career and apparently decided that going over Niagara Falls in his 3.6-meter kayak was the way to do it. (Niagara is considered Class VI rapids.) He had attempted to do it 10 years earlier, but his parents tipped off police, who stopped him.

This time, that didn't happen. He brought three people with him to videotape his stunt, and he wouldn't wear a helmet because it would hide his face in the tape. He also didn't wear a life preserver, thinking it might make it difficult for him to get out of his kayak if he should become trapped under the Falls. He confidently had dinner reservations downstream, as his plan had been to continue riding the Niagara rapids after he successfully went over the Falls. His body was never recovered.