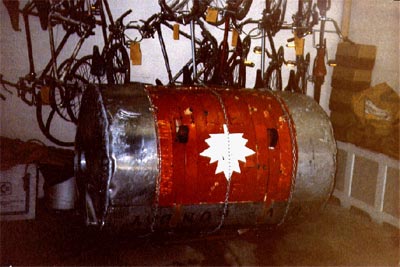 Dave Munday decided to give Niagara a try in 1985. He was a 48-year-old mechanic and went over the Falls in a steel barrel, becoming the tenth person to survive the leap.

In 1990, he tried it again. His barrel became stuck at the very brink of the Falls and had to be removed by a crane by the Niagara Parks Police. Never one to give up easily, Dave attempted going over the Falls again in 1993. This time he went in a red-and-white steel barrel with the words "Dave Munday challenges Niagara Falls for the last time" painted on the side. He took with him a two-way radio but no air tanks.

He launched from the same place that he did in 1985 and went over the Falls in less than six minutes. It took rescuers 45 minutes, however, just to get the four bolts off and open up the barrel to get him out. But he survived once again, and Dave became the first person to go over the Falls twice and the first to survive going over twice.

Barrel used by Munday to go over the Horseshoe Falls in 1993, floating at base of Falls
Photo courtesy Niagara Falls Public Library and George Bailey