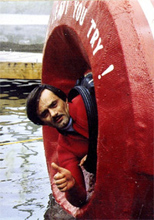 It took another 23 years for someone else to decide to brave the ride over Niagara, and that someone was a Canadian named Karel Soucek. It was 1984. Like many during the previous 23 years, Karel had ridden the Niagara rapids and lived to tell about it, but the ultimate thrill was still going over the Falls. He planned the trip and announced his plans a year before he went over.

His barrel was crafted from a lightweight wood and plastic with weight in the end as ballast so he would be sure to go down feet first. He had a two-way radio so he could communicate during the potentially deadly plunge and particularly during the turmoil that awaited him at the bottom. It was reported that he went over the Falls at 75 mph (120 kph) and then bobbed around in the crashing waters and rocks for 45 minutes. His only injuries were cuts on his face from his wristwatch -- his arm was flailing when he hit the water.

Once he was towed to shore, his barrel was confiscated by the police, and he was charged with stunting without a license. His fine was $500.

The following year, Karel was killed performing a free-fall stunt in a barrel from the top of the Houston Astrodome into a tank of water 10 feet (3 meters) in diameter.