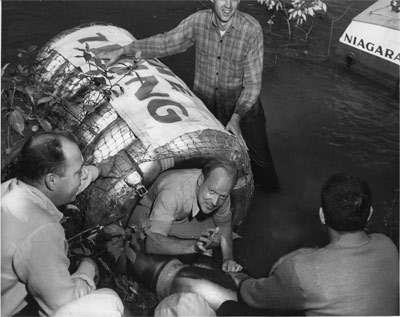 Hill, Jr., posing in the "Thing" in which he lost his life, August 5, 1951
Photo courtesy Niagara Falls Public Library and Ron Roels

For 21 years, no one went over the Falls; then, in 1951, William Hill, Jr., decided to attempt the plunge. He had been living in the shadow of his father, William Hill, Sr., a famous river man who had gone through the Niagara rapids in a barrel several times and rescued numerous people from the river (the same man who, with Bobby Leach, tried to get Charles Stevens to test his barrel over the Falls). The younger "Red" Hill made three trips through the rapids like his father, but never made the fortune nor received the fame he thought he should.

Finally, he decided he had to go over the Falls in order to make his name. His limited funds prevented him from building a heavy barrel like he had used to ride the rapids; instead, he put together a relatively flimsy craft made of 13 large inner tubes held together by straps and encased in a fishing net. He called it "The Thing."

On August 5, 1951, he entered the river upstream. After two hours, he finally went over the Falls. "The Thing" wasn't robust enough to handle the Niagara, however. It broke apart when it became caught under the falling water. It took two minutes for pieces of it to begin to surface. Hill's body was found the next morning.

It was the public outcry after Red Hill's death that made public stunting at Niagara Falls illegal.