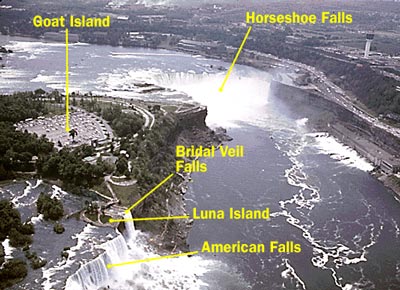 Niagara Falls lies on the Niagara River between Canada and New York. Water from four of the Great Lakes runs into the Niagara River and drains into the lowest Great Lake, Lake Ontario. While the original location of Niagara Falls was in present-day Lewiston, New York, it has since crept southward to its current location due to erosion. The falls recede about 4 to 5 feet (122-152 cm) each year.

Niagara Falls is actually not one waterfall, but three. The Niagara River flows down from Lake Erie and is divided by Goat Island. There, part of it flows to the horseshoe-shaped Canadian Falls (aptly named Horseshoe Falls), and the rest flows to the American Falls. At the American falls, the river is also split by a second small island, Luna Island, creating the third, small waterfall known as Bridal Veil Falls.

The vertical drop to the water at the bottom, in the Maid of the Mist pool, varies depending upon how much water is being diverted to the hydroelectric facility upstream of the Falls. The American Falls is slightly higher than the Horseshoe Falls but has much less water going over it. It is estimated that 10 percent of the Niagara River's water goes over the American Falls, while 90 percent goes over the Canadian Horseshoe Falls.