Survival Fishing in the Jungle 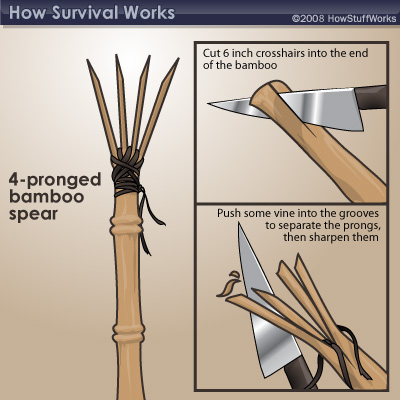 With a little practice, you can catch fish using a spear, just like your favorite jungle tribesman.

Plants, fruits and insects are a valuable survival commodity, but if you really want a good source of protein you're going to have to test your mettle as a fisherman. Hunting for meat is possible, but it's very difficult and can be dangerous. There aren't many mammals in the jungle you'd want to eat anyway. In fact, more protein can be found in the desert than on the floor of a rainforest [source: The Nature Conservancy]. Hunting techniques like stalking and spearing, using a sling or a homemade blow gun are passed down for generations in native tribes and are very difficult to master. They'd likely just lead to wasted energy and no food. Then there's the fact that you can't keep meat fresh for very long. All in all, unless you're an experienced survivalist, your energy is better spent fishing than hunting.

The Amazon River is home to more than twice the number of fish species than the Atlantic Ocean. One of these is the piranha. They're edible, but don't really have much meat on them, so try to focus on other fish. Despite their reputation, piranhas don't typically bother humans, but avoid getting into the water if you have an open wound -- they're attracted to the scent of blood. There's also a species of catfish called the pirarucu. It's the largest freshwater fish in the world, and just one of these giants can yield as much as 150 pounds (70 kg) of meat.

Unless you have a survival kit with some fishing gear, spear fishing is probably your best bet. Bamboo is plentiful in the jungle and makes a great spear. After you find a 6- to 8-foot (1.8- to 2.4-meter) piece of bamboo,

Just like that, you have a four-pronged fishing spear. Now comes the tricky part -- spearing the fish. Once you're at the river or stream, find a rock to stand on or wade into knee-deep water. Move slowly and deliberately to avoid scaring away the fish. Hold the spear with both hands, with the sharp end a couple of feet from the surface. This allows you to strike fast when you see your prey. Once you spot a fish, stand still and wait for it to swim close to you. Once it's within range, jab quickly and forcefully and try to pin the fish either on a rock or the bed of the stream. Just remember that practice makes perfect. You may not land one on your first go-round, but keep at it and you'll eventually get the hang of it.

Once you have your fish, cook it to improve the taste. You don't need a skillet or deep fryer -- all you need is a fire and some rocks for a primitive oven:

Now that you have some fresh water and a nice 200-pound catfish roasting on the fire, why don't you get a little civilized and build a home for yourself? Find out how on the next page.