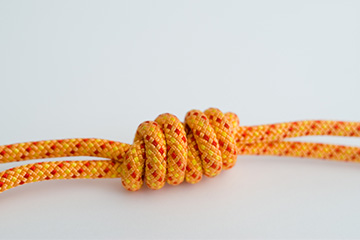 Many people think the only knot they need to know how to tie is the one used to tie shoes. That's a bowknot, by the way. Or, to us common folks, bunny ears. But knots come in handy for many more things. Fishermen use a wide variety of knots to fasten everything from nets to boats. Climbers need knots for scaling up mountains — a poorly knotted line can result in injury or even death. And then there are cowboys, farmers and cargo-haulers. The times a good, strong knot can come in handy are limitless.

So what's the best knot of all? There isn't one. It all depends on what you'd like the knot to do. Do you want it to secure something tightly or loosely? Do you want to lash items together or fashion a knot that's adjustable? Sometimes it's handy for a knot to be secure, yet able to release quickly. And what about a knot's complexity? If you can't tie the thing easily, is it really so great?

The double fisherman is a knot used to tie two ends of a rope or cord together. Actually, it's two knots that slide together. Over time, the knots sort of seal themselves as one, and often the only way to undo the thing is to cut the knots out. Interestingly, the double fisherman's knot is rarely used in fishing. It's common in climbing and other sports. Kayakers and canoeists, for example, sometimes use it with short pieces of rope to create grab handles for their watercraft [source: NetKnots]. So how did it get the name "double fisherman"? Since it's easy to tie, it works well on small lines, such as fishing line [source: Indoor Climbing]. Ready to learn how to tie one?

So you're not too scared to try the double fisherman's knot? Remember, only proceed if you're joining two pieces of rope or cording that you'd like to stay permanently tied. Here's how to do it:

If you've properly tied a double fisherman's knot, each knot should have an X on the same side. The other side should show four neat rows of wound cord [sources: A Site About Nothing, Net Knots, YouTube]. 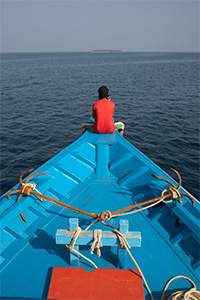 Althought double fisherman's knot is called the "impossible knot," it’s seldom used by fishermen. Kayakers and canoeists are more likely to use it.
© Richard Baker/In Pictures/Corbis

The double fisherman's is one tough knot, it's true. But so is the constrictor (as in boa). Also called a gunner's knot, whip knot and timber knot, this particular knot is used to bind a rope very tightly to an object, such as tying a boat to a pole. If you'd like to tie a constrictor over something soft, the knot will hold better if you use a hard, stiff cord. If you intend to tie it over a hard surface, in contrast, a soft, stretchy one is best [source: Knots 3D].

Like the double fisherman's, the constrictor is a really difficult knot to untie. In some cases, it may be impossible, especially if you used a small line. In that case, the knot's binding force is concentrated over a smaller area, which gives it an extra hard bite. Sometimes, the knot can damage or scar the item it's tied around. If the constrictor doesn't sound ominous enough, there's also a double constrictor -- basically the same knot tied twice. Yes, it's even harder to untie [source: Knots 3D].

Another knot that can be difficult to loosen is the figure 8 loop. This knot is often used in climbing to secure the climber to the rope through his harness. If the climber falls, it's the figure 8 loop that will stop him from smashing into the ground (assuming it's tied properly). So it's a good thing it is hard to untie [source: Climbing Knots].

Are there any knots that are easy to undo? Certainly the bowknot, the one you tie your shoelaces with, is. But there's a knot that's made specifically to be easily loosened, and that's the highwayman's hitch. This simple, quick-release knot is used when tying up a horse, for example. The knot was supposedly given its name centuries back, when bandits — then known as highwaymen — tied up their horses with these knots when they ran off to quickly loot a spot [source: Action Donation Services].

To many, knots are synonymous with the Boy Scouts. And for good reason: The Boy Scouts movement began in England, courtesy of a chap named Robert Baden-Powell. Baden-Powell was a famous British war hero who wrote a military field manual called "Aids to Scouting." Young boys discovered this book and found its lessons on tracking and observation fascinating. So Baden-Powell penned another book, "Scouting for Boys," aimed at this younger audience. That book, published in 1908, was the start of the Boy Scouts [source: History].

"Scouting for Boys" contained information on activities like camping, woodcraft, boating and lifesaving. It's here that the necessity of learning various knots came into play — a whole chapter was devoted to saving lives with knots. Additionally, the book taught the importance of morality, chivalry, patriotism and good deeds [source: History].

Britain's The Telegraph reported scout leaders in England no longer are required to know how to tie knots, as today's merit badges are more focused on learning skills like public relations and IT than climbing or sailing. Still, many scouts there and in other parts of the world do learn how to tie many knots during their years in the organization. Here are six of the more common knotsAmerican Scouts are taught [sources: Boy Scout Trail, Boy Scouts of America]:

Author's Note: How to Tie the Impossible Knot

I've never been good with knots. Actually, the only one I know how to reliably tie is the good old bunny ears. But I'd like to take a stab at the double fisherman's. I just need to find two things I can tie together that can remain tied for eternity!

Can you really escape an alligator if you run in a zigzag?
10 Threats You Should Never Try to Outrun
The Heart-breaking End of Legendary Adventurer Sir Ernest Shackleton