How to Send a Smoke Signal 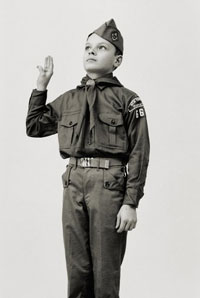 The first thing you'll need to create a smoke signal is a fire. Build your fire in an open area as high up as you can. Your goal is to have the signal seen from many miles away, so a clearing at the top of a mountain is a good location. After you have a good fire going, add grass and green sticks and branches to your fire. This will smother the flames and create a dense, white smoke.

To send your message, wet a blanket to keep it from burning and throw it over your smoking fire. Once the trail of upward smoke has ceased, pull the blanket off to send a white puff skyward, and then put the blanket back on. This will send a one puff message. What message it conveys is up to you and your recipient. You can repeat this action to create a two puff and three puff message.

While this sounds like an extremely basic form of communication, you need to remember that it's what the puffs of smoke represent that counts. The messages that Native American tribes sent were simple, but very important. Here are a few of the common signals used by the Apache Indian tribe:

If you want to learn more about smoke signals and other survival techniques, try the links below.

­­The Vatican has used smoke to signal the election of a new pope since the late 1870s. In Catholic tradition, the election of a pontiff is signaled to the masses by sending white smoke up the Vatican chimney. If a new Pope is not elected, black smoke is used.

This worked well until the 1958 papal election sent a cloud of grayish smoke up the chimney, leaving the crowd in the dark about the status of the election. Since then, they've used smoke bombs and Army flares to try and produce a more distinguishable color. Unfortunately, this often left hazardous smoke inside the room as well.

Recently, the Vatican began working on a new procedure for their smoke signal, as well as adding the ringing of church bells to indicate a positive election result [source: ­AP].