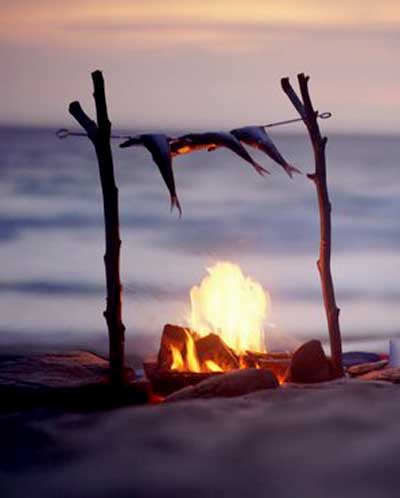 While the meat you kill in the wild may taste fresher than what you buy in the grocery store, that doesn't mean it's clean enough to eat raw. Although you sometimes cannot see it, bacteria and parasites may be hosting dinner parties of their own on that meat you just hunted down.

Carnivorous wild game, including boar, bear, wolf and fox, carry a higher likelihood of passing along trichinellosis. Trichinellosis develops when people eat animals infected with a parasite called trichinella worm. This nasty invader can leave you with weakened bowels and body for months. In fact, the Centers for Disease Control reports that it was a common infection before meat preparation became more standardized [source: CDC].

Raw caribou consumption also is commonly linked with the bacteria brucellosis that wreaks bodily havoc in the form of fever, fatigue and appetite loss. Other more familiar invisible bacteria, such as E. coli and Salmonella, can also make a home in raw meat.

In fresh water, in particular, fish may pick up parasites or bacteria, such as tapeworm. Toxins from commercial development or other human settlements can also taint the fish.

Because cooking can destroy much of the harmful bacteria, most of the meat you procure in the wild will be as safe to eat as what you might order at a restaurant. But keep in mind, if you come across a dead or sick animal, you should not consume its meat. Visible signs of abscesses, fungal growth and tumors inside or outside the animal or fish's body also mean that you should toss it.

If you can't eat raw meat in the wild, how do you cook it? You've got several options:

For any raw meat remnants, you should use natural refrigeration methods. If you're stuck in the Arctic, that won't be a problem since you can simply pack it in snow. In more temperate regions, you can insulate the meat and place it in a stream bed or bury it in cooler soil near a water source. Remember, except for freezing, these storage techniques are temporary (and you should beware of foraging animals).

Some scientists and anthropologists believe that humans are biologically inclined toward cooking food. Raw meat is much tougher to chew, and raw plant food is too fibrous for humans to easily digest. Although some countries, such as Japan, integrate raw meats into their diet, research has not uncovered a civilization that has lived totally off of raw food. Physical evidence of this adaptation includes our relatively small teeth and raw food sensitivities.