In the mid-19th century, Henry David Thoreau gained fame after sequestering himself for two years at a small cabin on Walden Pond. A century later, a man named Richard "Dick" Proenneke took the same idea to an extreme — he plunked himself down in the icy wilds of Alaska and lived there alone for 30 years. In doing so, he became an icon of survivalist grit and conservationism. The house he built for himself from scratch is now on the National Register of Historic Places.

So how did he get there? Born in Iowa in 1916, Proenneke (pronounced "prin-ecky"), was swept into the Great Depression as child, an event that molded his sense of extreme frugality. In 1941, he enlisted in the U.S. Navy the day after Japan attacked Pearl Harbor. Notably, he signed on as a carpenter's apprentice.

Struck by rheumatic fever that laid him low for half a year, he was given a medical discharge from service in 1945. After the war, he trained to become a diesel mechanic and also tinkered with sheep ranching in Oregon.

But it was a visit to a Navy buddy in Alaska that gave him the wilderness bug — and he couldn't shake it. Eventually he became a heavy equipment operator at the naval base at Kodiak Island in Alaska. In 1962, Proenneke encountered the area that's now called Lake Clark National Park and Preserve, about 120 miles (193 kilometers) southwest of Anchorage. Its wild beauty struck a chord with Proenneke.

"Twin Lakes is a spectacular glacially carved set of lakes nestled against the jagged Neacola Mountains of the Alaska Range," emails Megan Richotte, program manager for interpretation, partnerships, and public affairs at the park. "Open boreal forest in the surrounding area ensures ready firewood and building logs as well as good hiking." Proenneke thought the area was a perfect place to settle.

In 1968, at age 52, he found a shoreside spot through a friend and began building a small (12-by-16 foot or 4-by-5 meter) retirement cabin using only simple tools, mostly local materials, and his ingenious carpentry skills. He chopped down spruce trees, lugged them by hand, and assembled a gable roof topped with moss and sod. He built a tall chimney using local beach stones.

An overview of the Richard Proenneke Site at Lake Clark National Park and Preserve, showing some of the natural beauty Proenneke witnessed every day.
Kent Miller/NPS

Proenneke also constructed a combined storage shed and outhouse, but rarely used the latter because he didn't like the idea of digging latrines over and over again. Instead, he mostly just went in the woods, saving the pit's space for his visitors.

He filmed much of the construction process with a 16 mm movie camera mounted to a tripod. Along the way, he documented much of the local wildlife, too.

Of course, there was no WiFi in his cabin. Nor was there electricity, running water or a telephone for emergencies. Proenneke relied on local friends to fly in supplies roughly every few weeks. Often, that was the extent of his human contact for months at a time.

"I have found that some of the simplest things have given me the most pleasure. They didn't cost me a lot of money either. They just worked on my senses. Did you ever pick very large blueberries after a summer rain, walk through a grove of cottonwoods, open like a park, and see the blue sky beyond the shimmering gold of the leaves? Pull on dry woolen socks after you've peeled off the wet ones? Come in out of the subzero and shiver yourself warm in front of a wood fire? The world is full of such things."

Alone in the Wilderness

Going such long periods without companionship would tax many a person. "One of the most challenging aspects of the cabin's location may be that because it is situated on the southern shore of the lake, the low winter sun does not hit the cabin for months at a time," says Richotte. "The long season of darkness – not to mention the bitter cold and relentless snow — is enough to make some Alaskans feel depressed and anxious."

But Proenneke seemed to thrive in this atmosphere. Alan Bennett was a wildlife and fisheries biologist in the Lake Clark area who knew Proenneke personally, and later worked as volunteer guide at his now-famous cabin. He's also the author of "Dick Proenneke, Reflections on a Man in His Wilderness." "In the late 60's Dick was truly alone at Twin Lakes for much of the year," says Bennett via email. "His survival in a brutal winter environment rested almost entirely on his own resourcefulness and fortitude."

An obsessive observer and diarist, Proenneke once noted he was so busy with his life that he was never lonely. He spent must of his free time writing about the weather, the environment and the animals, some of which he befriended with regular treats.

"'Idle time' was not in Dick's vocabulary," says Bennett. "He was always engaged in some activity."

He hiked thousands of miles per year, becoming intimately familiar with the miles of wilderness around his cabin. In order to escape the isolating feeling of his valley home, he'd trek to peaks and admire the breathtaking views.

He caught and ate fish from the lake, and sometimes shot and made dinner out of the porcupines that chewed relentlessly on his house. Sans refrigerator, he dug into the ground and created a chilly storage box that helped to prolong his fresh foods. Importantly, he built another storage box, this one on high wooden poles, that was out of the reach of bears and other critters.

Yet Proenneke wasn't a bitter or angry isolationist. He happily wrote replies to just about anyone who sent him letters. And he made occasional forays to the Lower 48 to visit family.

In 1973, a friend compiled Proenneke's lengthy journals into a book titled, "One Man's Wilderness: An Alaskan Odyssey." Suddenly, he found fame. People from all over the world made the journey to Twin Lakes to seek him out.

His home movies were turned into four one-hour documentaries, the first called, "Alone in the Wilderness." They show him at his survivalist best – chopping wood, wandering the mountains, living alone in a place where most people could not. A short documentary called "One Man's Alaska" also shows just how tough but personable this off-the-grid man could be when he turned on the charm.

Finally, in 1999 and in his early 80s, Proenneke was too elderly to carry on with his solitary lifestyle. He returned to the Lower 48 to live with his brother in California. He died in 2003.

He left his cabin as a gift to the National Parks Service. (The NPS had managed the area where his home was since 1978.) You can visit the cabin in the summer at Lake Clark National Park and Preserve, but in this roadless area you'll either have to hire a floatplane or hike in and camp nearby to see it.

Either way, you'll find a landscape that's changed a lot in the past 50 or 60 years. "Winters at Twin Lakes today are relatively mild due to climate change," says Alan Bennett. Today many people live year-round in remote bush Alaska, but they have all the modern-day props — satellite internet service, solar-power, and scheduled float plane service for mail and supplies." Things no doubt, Proenneke would have shunned even if he'd had access to them.

NOW THAT'S INTERESTING
In his youth, Proenneke had been a trigger-happy hunter. But his views changed during his time in Alaska. He abhorred the fact that hunters would only take the best cuts of meat in the animals they shot. He'd often scavenge those carcasses so that they wouldn't go to waste, and with only two exceptions never shot big game for himself because it was simply "too much meat" for one man.

How to Make Kinetic Sand 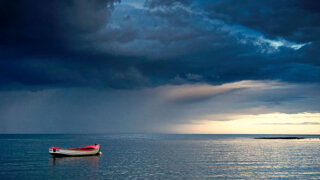 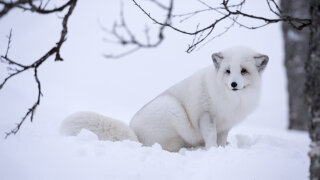 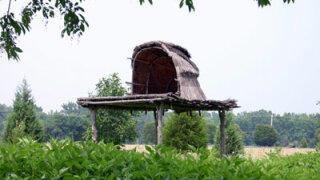 How to Build a Shelter