Dangers of the Desert: Scaly Critters 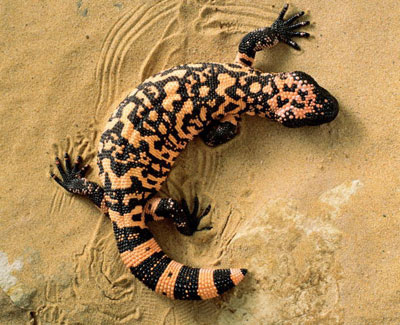 If you saw this Gila Monster coming you way, would you wait around to introduce yourself?
Tim Flach/Getty Images

Snakes - The only snakes you need to worry about in the desert are the rattlesnake and the coral snake. Both are venomous and dangerous to humans. There are many different kinds of rattlers, and they're easy to spot by the buzzing rattle on the end of their tails. Coral snakes are slim and have red, yellow and black rings. They can be deadly to humans. There are nonvenomous snakes that mimic the coral snake, but the colors aren't in the same order. There's a handy saying to help you remember which is which:

Red touches yellow, it can harm a fellow.

Just remember, you're Jack in this scenario. Snakes don't have any interest in people, so you'll likely only get bitten if you surprise one. Keep your eyes peeled, watch where you step and avoid caves and dark holes.

Lizards - The desert is chock-full of lizards. Luckily, there are only two that are venomous -- the Mexican Beaded lizard and the Gila Monster. The Mexican Beaded is only found in the deserts of Mexico and Guatemala. Gilas are found in the Sonoran Desert of the United States and northern Mexico, and their bite is extremely painful. Gilas can be as large as two feet and have round, raised scales. They're short, stout and have a thick tail. The Mexican Beaded has white to yellow spots and stripes on round, raised scales and is about a foot long. While both are venomous, neither is considered fatal. However, if you see a two-foot long lizard coming in your direction, maybe you should just walk the other way.

If you do get bitten by a snake or have a Gila Monster attach itself to your leg, try to stay calm. Many people's attempts at first aid are performed in a panic, and they often end up doing more harm than good. Chances are, the bite is not life-threatening and you'll have a few hours before any serious complications set in.

In addition to these slithering and crawling dangers, there are also all kinds of bees, wasps, hornets and ants that can make your life miserable. If you stay on the alert, watch your step and don't go digging around in the sand, you should be fine.

In the next section, we'll look at two more natural desert dangers -- flash floods and sandstorms.