Dangers of the Desert: Crawlers 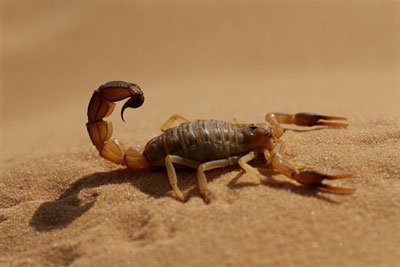 If you camp in the desert, this scorpion might climb into your shoe and try to kill you.
Frans Lemmens/Getty Images

The desert is a lovely place, but fraught with peril. They don't call it Death Valley for nothing. Aside from the oppressive heat and lack of water, the desert is also full of critters that can bite and sting. Some of these guys can even kill you if you aren't able to find medical help. Spiders, scorpions, centipedes, and snakes are all found in dark places -- caves, abandoned buildings and under rocks. Never reach into a hole or under a rock and always check where you lay down. It's also a good idea to shake your boots or shoes before you put them back on.

Spiders - Deserts have many kinds of spiders, but most of them aren't venomous. The creepiest looking of these is probably the tarantula. Although they may look fierce, their bite isn't very dangerous and they aren't very interested in you anyway. What you need to watch out for is the brown recluse and the black widow. You can spot the black widow by its shiny black coat and red hourglass marking on its belly. Their bites are rarely fatal but can make you very sick -- headaches, dizziness, nausea and cramps. Brown recluses are light brown and have a violin-shaped marking on the head and back. If you're bitten by a recluse and don't get medical attention, you could die, but it's not likely.

Scorpions - There are more than 30 different types of scorpions in the Arizona desert alone, but only two produce venom that can kill a human. They inject this venom through stingers on their tails. You'll know if you've been tagged by a scorpion if you feel pain at the site of the sting, numbness, increased heart rate and difficulty in breathing. Keep your distance from all scorpions just to be safe.

Spider bites and scorpion stings are most dangerous to small children and the elderly. If you're bitten or stung, treat it the following way and get some medical attention as soon as possible:

On the next page, we'll learn about snakes and lizards.

You can go quite a few days without any food at all if you have water. You can read more about this How long can you go without food and water? If you have some food, ration it out and only eat when you feel your energy is low. Anything you eat will increase your need for water, so try to stick to hydrating yourself. If you have no food and feel weak, try to find some cactus fruit. These are the red and yellow pieces that grow from the tops and sides of the prickly desert plant. Don't eat any other types of plant. There are more than 700 types of poisonous plant in the United States and Canada alone, so unless you have a book on identifying edible plants, it's not worth the risk.