Browse the article Why can't we convert salt water into drinking water? 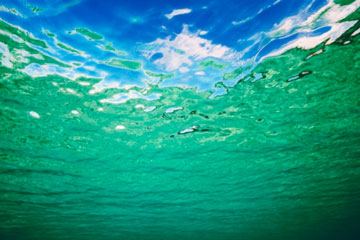 It seems strange that water should be such a scarce resource when our planet is drenched in 326 million trillion gallons of the stuff. But it turns out that less than one-half of 1 percent of it is drinkable. Out of the rest, 98 percent is oceanic salt water and 1.5 percent remains locked up in icecaps and glaciers. The stark irony of Samuel Coleridge's immortal line "Water, water, everywhere / Nor any drop to drink" is manifest each year in coastal disasters around the world, like Hurricane Katrina, the 2004 Indonesian tsunami and the 2010 Haiti earthquake, as people within sight of entire oceans are threatened with dehydration.

Between droughts, natural disasters and the large-scale redistribution of moisture threatened by climate change, the need for new sources of potable water grows with each passing day. Each year, the global population swells by another 85 million people, but worldwide demand for freshwater increases at twice the rate of population growth, doubling every 20 years or so [sources: OECD, UNDP]. Throughout the world, our most vital resource is under stress from pollution, dam construction, wetland and riparian ecosystem destruction, and depletion of groundwater aquifers, with poor and marginalized populations getting the worst of it [sources: Gleick, Gold, OECD, UNDP, UNESCO-WWAP].

So why can't we convert seawater into drinking water? Actually, we can and we do. In fact, people have been making seawater drinkable at least as far back as the ancient Greeks. But when taken to the scale of cities, states and nations, purifying seawater has historically proven prohibitively expensive, especially when compared to tapping regional and local sources of freshwater. However, as advancing technology continues to drive costs down and freshwater continues to grow scarcer and more expensive, more cities are looking to seawater conversion as a way to meet this vital demand [source: Maloni].

Read on to find out how and where seawater is being converted into drinking water today, including how desalination is bolstering disaster relief in Haiti.

How and where is desalination used today?

Desalination has come a long way in the 2,400 years or so since people boiled salt water and collected the steam in sponges. Yet, the most widely used method is still based on the same principle: distillation. Essentially, distillation artificially mimics what occurs in nature: Heated water evaporates to become water vapor, leaving salts and impurities behind, and then condenses as it cools to fall as freshwater (aka rain). Distillation plants refine and speed up this process by applying artificial heating and cooling and by evaporating water under lower air and vapor pressure, which significantly reduces its boiling point. This method requires a great deal of energy, however, so distillation plants are often located alongside power plants, where waste heat is available to bring the water up to a volatile temperature [source: Water-technology.net].

Another method, reverse osmosis (RO) desalination, uses pressure to force water through filters, straining out other substances at the molecular level. Developed in the 1960s, the process became feasible on a commercial scale in the 1970s, ultimately replacing distillation as the method used in most new desalination facilities, in part because it requires less energy [source: NRC-WSTB]. Besides removing salt, both methods remove virtually every mineral and most biological or organic chemical compounds, producing water that is safe to drink, far exceeding federal and state drinking water standards [source: Maloni].

So how widespread is desalination? Specific figures are elusive, as new plants are constantly being added and little data exists concerning plants that have shut down. It's also tricky to separate counts of distillation versus RO plants. However, a good ballpark figure is 8,000 RO seawater desalination plants globally producing a total of about 10 billion gallons (37,854,117 cubic meters) of drinking water each day, with older distillation plants still outnumbering RO [source: Maloni].

The largest users of desalination globally in terms of volume capacity are (in descending order) Saudi Arabia, United Arab Emirates, United States, Spain, Kuwait and Japan [source: NRC-WSTB]. Desalination provides 70 percent of drinking water in Saudi Arabia [source: Maloni]. Within the United States, Florida, California, Texas and Virginia are the largest users, and the country as a whole has the capacity to desalinate more than 1.4 billion gallons (5.6 million cubic meters) of water per day. To put that in perspective, that equates to less than 0.01 percent of municipal and industrial water use nationwide [source: NRC-WSTB].

Cruise ships, submarines and ships of war have been using desalination for decades. One impressive example, the aircraft carrier U.S.S. Carl Vinson, can make some 400,000 gallons (1,514 cubic meters) of its own freshwater every day, half of which is excess water that at press time is being used to aid disaster relief in Haiti [source: Padgett].

As much as desalination has increased over the years, it is still just a drop in the bucket. In this next section, we'll look at what's holding us back from a full-on sea change in freshwater supply.

The Cost of Desalination

There's little doubt that the world needs more drinking water. It's also abundantly clear that the need will keep pace with mounting population growth and the pressures brought about by global climate change. In the United States alone, experts agree that water demand already exceeds supply, projecting that 36 states will confront shortfalls within the next three years. Within 15 years, almost 2 billion people globally will live in areas confronting water scarcity, and, according to most model scenarios, such shortfalls will only worsen under climate change [source: Strassmann, IPCC]. Indeed, the availability and distribution of water is widely discussed as a likely determining factor in future global stability [source: USGS].

So, what is holding us back from diving in headfirst? Until recently, purifying seawater cost roughly five to 10 times as much as drawing freshwater from more traditional sources [source: USGS]. RO filters have come a long way, however, and desalination today costs only half of what it did 10 to 15 years ago. Consequently, transportation, energy and environmental costs have now replaced technology as the primary impediments to large-scale desalination [source: Maloni, NRC-WSTB].

Energy consumption accounts for as much as one-third of the total cost of desalinated water, making even coastal plants expensive to operate [source: Maloni, NRC-WSTB]. Inland states must also grapple with the sizeable expense of transporting seawater inland. They can opt to use local brackish (salty) water sources, instead, but then they face a different problem: how to dispose of the byproduct, a concentrated salt solution that coastal sites have the luxury of pumping back into the ocean (a practice that remains controversial in environmental circles). Zero Liquid Discharge (ZLD) plants are one way out, but they drive up the energy costs of what is already an energy-intensive process [source: NRC-WSTB].

Is desalination cost-effective? The answer probably depends on where you live. Given the high costs of freshwater importation and reclamation, desalinating seawater is an increasingly attractive option for water-stressed areas. The potential for desalination is limited mostly by social, political, environmental and economic considerations, which vary from place to place. Any way you look at it, the rising tide of desalination seems likely to remain a growing part of our water portfolio for years to come.