Adapting to a Desert Environment 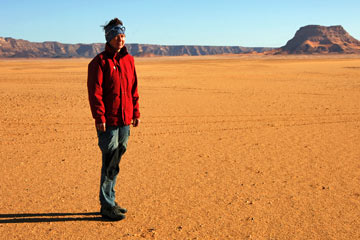 Most experts suggest you keep as much of your body as possible covered while you're in the desert, but opinions differ on exactly what type of clothes to wear.
iStockphoto/Thinkstock

Whether you're setting up a tent or sleeping in an air-conditioned RV, camping in the desert will require some serious adaptation on your part, because, let's face it, the desert is an environment where most people aren't very comfortable -- except for cowboys. And what makes cowboys so special? For one thing, they wear a lot of clothes, like jeans, long-sleeve shirts, bandanas and big hats, which limit their skin's exposure to the sun and reduce the amount of sweat they lose to evaporation [source: Megroz].

As far as clothing is concerned, most experts suggest keeping as much of your body as possible covered, but opinions differ on exactly what type of clothes to wear. Conventional wisdom says that synthetic fibers are the best type of clothes for any backcountry trip, in the desert or elsewhere, but some prefer cotton, because it retains water, which can help you to cool down on a hot desert day. While a cotton shirt might feel good when you're sweating in the midday sun, keep in mind that it won't feel so great once the sun goes down [source: Grubbs].

Getting acclimated to the intense desert heat typically takes about two weeks for most people, but staying in good shape and doing regular outdoor aerobic exercise in a hot climate is a good way to prepare for desert camping. No matter how fit you are, it's a good idea to pace yourself and to take regular breaks when doing anything strenuous in the desert -- there's a reason that many desert creatures move slowly.

As we mentioned earlier, staying hydrated is the key to desert survival, and that means drinking more water than you're used to -- as much as 6 quarts (5.7 liters) per day. One good way to prepare for your time in the desert is to practice drinking water when you don't feel thirsty, because that's the only way to stay hydrated in a desert climate. And if you plan to carry a backpack, you can prepare by training with a heavier pack than usual, because you'll have to carry more water in the desert than in cooler and wetter climates [source: Johnson].

During the day, temperatures in the desert can exceed 100 degrees Fahrenheit (37.78 degrees Celsius), but at night it can often get quite chilly. If you're camping in a tent, you'll need a good three-season tent to keep you and your things protected from the elements. But keep in mind that because daytime temperatures are so high, that heat can become magnified in some tents by the greenhouse effect, so you'll want to remove things like cell phones and other valuables that can be damaged by excessive heat.

Author's Note: How Camping in the Desert Works

I've done a bit of hiking in desert climates, and the thing that always surprises me the most is the extreme swing in temperatures each day. I love that dry heat and scenery of American deserts, but I have a healthy respect for the dangers they hold.