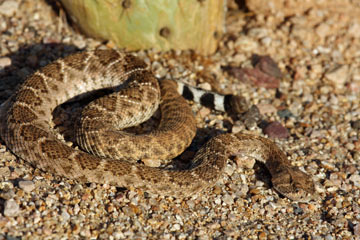 The desert is home to a frightful assortment of creatures that can ruin your camping trip with a single sting or bite, like this rattlesnake.
iStockphoto/Thinkstock

Although it doesn't contain as much wildlife as, say, a rainforest, the desert is home to many wild animals, birds and insects. Desert animals are supremely adapted to their surroundings, and many of them have adapted to manage their body heat and to blend in with the landscape. Signs of desert wildlife are typically much more subtle than in other regions, with temperature and time of day playing a big role in whether or not animals and other creatures will be out and about [source: NPS.gov].

Because the daytime heat is so powerful in the desert, many animals are nocturnal and spend most of the day sleeping in burrows or shaded areas. That can make it difficult for people to observe them without night-vision goggles. The best times to view mammals like prairie dogs, rabbits or even coyotes, are in the early morning and late evening, or in the spring or fall. Birds and reptiles are seen more commonly during the day than mammals, and many desert regions are home to a rich variety of both.

It's impossible to discuss wildlife without mentioning the many venomous insects and snakes that call the desert home, though. From scorpions and rattlesnakes to venomous spiders like the black widow and brown recluse, the desert hosts a frightful assortment of creatures that can ruin your vacation with a single sting or bite. The insects that have caused the most incidents in the American Southwest in recent years are Africanized bees, which are known to attack without provocation. If you encounter these hostile bees, your best recourse is to hightail it out of there [source: Megroz].

American deserts are home to several types of venomous snakes, including rattlesnakes, coral snakes and copperheads. Most of those species aren't aggressive unless they are provoked, so the best thing you can do to avoid having your camping trip cut short because of a snake bite is to be aware of your surroundings and to steer clear of any snakes. And don't even bother laying a ring or rope around your campsite; the myth that snakes won't cross a rope line has long been debunked [source: Tilton].

Rattlesnake bites, though usually not fatal, can be very painful, and hospital bills can cost thousands of dollars, and a bite can leave you with long-term tissue damage. Even if the weather is mild, it's a good idea to sleep in a tent and to keep the tent properly sealed in order to prevent snakes or other creepy crawlers from entering your sleeping bag. And if you know you're going to be camping in snake country, it's a good idea to carry a snakebite kit, which contains an extractor pump to remove venom. (Most snake venom pumps are also effective in treating bee or wasp stings) [source: ScienceDaily].