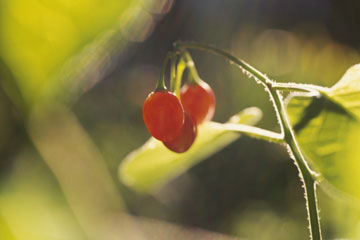 If you're a 21st century American, you may have never eaten fresh blueberries or blackberries that didn't come in a cardboard tray from a supermarket. Depending on the season, those store-bought berries may have grown shrouded in plastic on a gigantic factory farm or were shipped thousands of miles from Chile or Mexico [sources: Orzolek, Vivian]. Or maybe you've eaten frozen strawberries -- the ones that have been genetically altered with a cold-tolerance gene from Atlantic flounder [source: Brody].

Chances are the last thing you'd do is go out into the woods and eat wild berries that you picked from a bush. Perhaps you have Cub Scout memories of a nature hike during which a den mother hastily perused the poison section in her first-aid manual. "If you see any wild berries," she implored you, "don't pick them and don't eat them because they could make you sick or even kill you."

OK -- she wasn't completely wrong. Some wild berries are dangerous to eat. But plenty of others are not only safe, but delicious and good for you, whether you eat them fresh, cook them in pies or make preserves. Varieties of edible wild berries -- blackberries, raspberries, cranberries and others -- grow all over the North American continent. The trick is knowing which are safe to eat [source: Vaughr].

Summer is probably the best time to find edible berries, though you can find some in the spring and fall, and you can find cranberries in the winter [source: Elias]. Make your first few excursions under the watchful eye an experienced berry-picker from your area. He or she will know where to look, what to look for and what's safe to eat. You also should equip yourself with a copy of a reputable guidebook, such as botanists Thomas Elias' and Peter Dykeman's "Wild Plants, A North American Field Guide" [source: Vivian].

Some basic safety rules: Positively identify any wild fruit before you pick or eat it. Remember that just because animals eat it doesn't mean that it's safe for humans. Avoid areas with a lot of dead vegetation -- it may have been sprayed with herbicides. Be sure to make enough noise to let bears, who also are berry enthusiasts, know you're around [source: Vivian]. 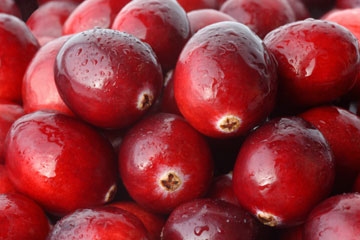 These juicy cranberries can be found in bogs and swamps.
Rosemary Calvert/Getty Images

There are far too many varieties of edible berries to list, but here are a few that you might find in the wild:

Cranberries (Vaccinnium angustifolium): The ones you find in the wild are the same species as the ones sold in supermarkets. Look for them from August until midwinter in swamps and bogs, and along the shores of lakes. They're found in low-lying shrubs with slender brown stems and green leaves that are rounded at the tip and whitish underneath. The ripe berries are bright red. Make cranberry sauce to go with turkey, or bake them into scones [source: Elias].

Huckleberries (Gaylussacia baccata): Starting as early as June in the southern United States and late summer to early Fall in the northern United States, you can find these berries in woods and clearings with dry to moist soils, on 4-foot-tall shrubs with numerous branches and broad leaves. Ripe huckleberries are black. Eat them fresh or use them in pancakes, jams and jellies [source: Elias].

Golden currants (Ribes aureum): One of 120 different species of currants and gooseberries in the genus Ribes, these were a favorite Native American food. They're found in the summer along streams, ravines and slopes in hilly to mountainous elevations. They grow on stiff-branched shrubs that can reach 6.5 feet (1.9 meters) in height, with rounded, three-lobed, light-green leaves and droopy yellow flowers. The berries are red or black when ripe. Use them to make preserves [source: Elias].

Allegheny blackberries (Rubus allegheniensis): One of numerous blackberry species that are found all over North America, allegheny blackberries are found in woods and clearings and along roadsides in the mid-Atlantic region from North Carolina to New York from midsummer through fall [source: USDA database]. The bushes, which have pointy medium-dark green leaves and white flowers with five petals, grow to as high as 9 feet (2.7 meters) tall and spread as wide as 12 feet (3.6 meters). Eat them in a bowl of milk with a touch of sugar to dilute the tartness [source: NPS].

Wild strawberries (Fragaria virginiana): Wild strawberries are also known as Virginia strawberries, but different varieties of them are found all over North America [source: USDA database1]. The ground-hugging plant, found in patches in fields, has a hairy flower stalk. The red strawberries, which ripen during the early summer, aren't usually as big as the supermarket variety, but they have a reputation for being delicious.

Some of the weirder-looking poisonous berries such as the eyeball-like white baneberries (Actaea pachypoda) found in the eastern and midwestern United States aren't likely to tempt your palate [source: USDA database 2]. But these are among the ones that resemble edible berries.

Climbing nightshade (Solanum dulcamara): There are numerous varieties of this invasive vine that grows in thickets and clearings across most of the United States and Canada [source: USDA database 3]. Its medium to dark green leaves are twin-lobed, veiny and pointed, and beneath the leaves are droopy, bright red berries that look a little like the cherry atop the pile of whipped cream on a sundae [source: Nightshade]. But don't eat this bittersweet fruit because it contains solanine and saponins, chemicals that attack the nervous and respiratory systems and can kill you [source: Couplan].

Sticky currant (Ribes Viscosissimum): This invasive weed is found in the western United States and Canada. Don't confuse it with the edible varieties of currants, because it'll make you puke. The sticky substance on the leaves, twigs and fruit are a warning sign, as are the bristly hairs that sometimes cover the fruit [source: Elias].

American pokeweed (Phytolacca Americana): Also called common pokeweed, this plant is found in most of the United States and in eastern and central Canada [source: USDA database 5]. It's found in woods, pastures and along roadsides. The pokeweed plant, which grows up to 10 feet (3 meters) in height, resembles a small tree and has dark green lance-shaped leaves that can be as much as 20 inches (50.8 centimeters) long, with white-green flowers. The berries, which are purple and black, droop like bunches of grapes. Pokewood juice once was used to improve the color of cheap wines, which may have resulted in more than a few drunks becoming violently ill. Like the rest of the plant, the berries contain poisonous oxalic acid, saporins and the alkaloid phytolaccin, which wreak gastrointestinal havoc and cause death from respiratory failure [source: Ohio State].

In addition, be careful with elderberries (Sambucus canaensis), which are found in woods and fields throughout the United States, even though the purple-black fruit, when ripe and cooked, is a safe traditional cooking ingredient in pies, pancakes, jellies and wine. The problem: Raw unripe berries -- the leaves, twigs and roots -- contain poisons like cyanogenic glycoside, which can cause nausea, vomiting and other yucky symptoms. So don't eat them off the bush [source: North Carolina State University].

For more on surviving and enjoying the great outdoors, visit the links on the next page.

10 True Stories of Survival Cannibalism
How Long Can You Survive Adrift in the Ocean?
How to Find True North