Browse the article Would a knife or a gun serve me better in the Alaskan wilderness? 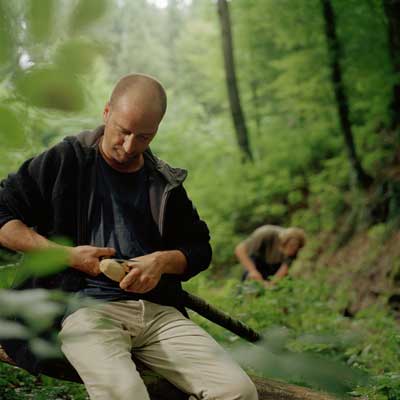 Alaska Image Gallery A knife will serve you better than a gun in the wilderness. See more pictures of Alaska.
Alexander Walter/Getty Images

Le­t's p­lay a quick game of "Wou­ld You Rather" survival-style. If you were out in the Alaskan wilderness, by choice or circumstance, would you rather have a knife or a gun with you?

As you make your choice, consider the environment. Since the Alaskan wilderness covers an area of more than 90,000 square miles (233,098 square kilometers), you could encounter any number of survival situations. During the winter, you might wander over an expanse of snow and ice, and in the summertime, you're witness to greener foliage and ambling wildlife. You could be on the side of a mountain, on top of a glacier or in a forest.

Because of its role with many basic survival necessities, you're better off in the Alaskan wilderness, or any wilderness for that matter, with a knife.

­But what about protecting yourself from wild animals? What good would a knife do if you're not alive to use it? Although a gun could certainly help you kill Alaskan predators, such as the black bears, Alaska's Department of Natural Resources warns that people with guns often hurt themselves more frequently than they do bears [source: Alaska Department of Natural Resources]. Also, grizzly bears, in particular, will usually shy away from attacking if you stand still, raise your arms and speak to the animal in a commanding voice.

How about shooting a gun as a distress signal? You can use reflective surfaces, like a large knife blade, to create a bright sunspot that you can flash three times as the international signal for rescue needed. If used correctly, people can spot this type of signal from more than 10 miles away (16 kilometers) [source: Tawrell]. And unless you want to lug around a cache of ammunition, a knife will likely prove more lasting for the long haul.

If you aren't convinced yet that knives are a cut above firearms, read the next page to learn more ways they can help you withstand the unique challenges of the Alaskan wilderness.

Men have used knives for utilitarian purposes for two million years, with chipped rocks as the predecessors to today's precision blades. A number of outdoor and trekking businesses are passing those ancient skills along through knife-only survival courses. Many of them consist of two- or three-day hikes, when participants sometimes take only a knife in with them. They aim to teach hikers how to fulfill all major survival needs with a knife -- shelter, food, fire and water. 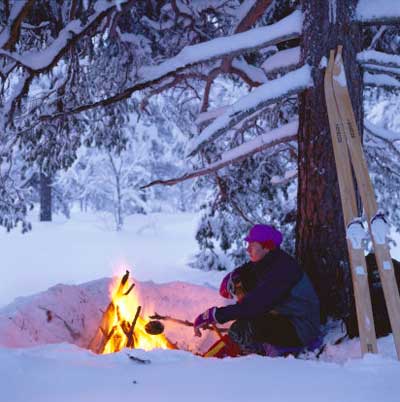 In the Alaskan wilderness, heat is a must for survival. You have multiple options for starting a fire with the help of a knife.
Johner/Getty Images

Alaskan law requires pilots to carry a survival kit containing a knife on their planes. Likewise, a majority of survival guides and books recommend including some sort of knife in every good kit. Even TV's "Survivorman" host Les Stroud doesn't set off into the wild without one. Because of its myriad uses, some survival sources name the knife as the most important tool that you can take into the wild.

It slices, dices, carves, cuts, whittles, hacks, plies and even removes fleas from your toenails. The knife made sliced bread what it is today, and can mean the difference between life and death for you in the Alaskan wilderness.

­Perhaps the most important survival necessity your knife can supply in Alaska is heat. Hypothermia poses a serious danger to people stranded in the wilderness since temperatures in the state's interior can drop to more than minus 40 degrees Fahrenheit (minus 40 degrees Celsius), and the wind and rain of the coastal and northern regions can also send your body temperature plummeting.

To stay w­arm and dry and avoid hypothermia, you can strike flint against a steel knife blade to create a spark. Other methods also include sharpening the tip of a stick and making a fire plow or bow drill, described in detail in How to Start a Fire Without a Match. Once you have fire, you can also cook, boil and purify water, clean your clothes and produce smoke billows to signal rescuers.

Since glaciers cover parts of Alaska, and snow and ice blanket some of the 3 million lakes and other bodies of water during the winter, you may be wondering how a knife could possibly assist with protecting you from a frozen fate. First, you can chip away ice and snow to hollow out a snow cave shelter. It can also keep you from drowning if you fall through an ice-covered body of water. By stabbing your knife in nearby thicker ice, you can get enough leverage to pull yourself out of the freezing cold, and extremely dangerous, water.

­If you have a knife ­with a longer blade, you can test the compactness of snow on a mountain side. Avalanches claim lives every year in Alask­a, and testing whether the snow is dense or layered can save your life. Loose and layered snow means a greater chance for avalanche, and you should probably choose another path down the mountain.

These examples represent only a few ways a knife can serve you in the wild. If you want to learn more ways that knives can help you survive in the wilderness in Alaska and beyond, read the links on the next page.

Selecting and Sharpening Your Knife

In general, a single-blade sheath knife will serve you the best in the Alaskan wilderness. Although pocket knives are compact and may come with other tools attached, their blades may be more prone to breaking.

To sharpen your knife, find a stone such as sandstone, granite or quartz with a smooth side and a rough side. Wet the rock with water or saliva, and on the smooth side, hold the knife with one hand and gently press the blade at an angle against the rock. Move the blade away from you in a clockwise direction. For the other side, circulate it counterclockwise. Dry the knife thoroughly before you stow it away in its sheath.