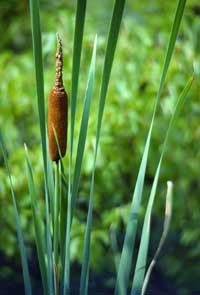 You can eat all the parts of a cattail plant.
Jack Hollingsworth/Getty Images

Although animal meat offers the best energy source because of its fat, Alaska also hosts an array of edible and easily recognizable plants. But unless you know what you're dealing with, plant food can be risky. Don't eat anything that you cannot identify since many species look similar, but can be fatal when ingested. Pay careful attention to the leaf shape, spacing and root structure. To be safe, don't eat any mushrooms.

According to the U.S. Army Survival Handbook, there are some rules to live by for selecting plant food outdoors. In general, do not eat a plant if it has:

While hundreds of edible plant species exist in Alaska, there are some commonly known varieties that you can easily remember. For instance, cattails grow in wetlands and swampy areas. You can eat the telltale brown stalk, along with the roots and leaves.

For a sweet treat, a number of berry species grow throughout the state. In forest and woodlands in particular, you can find raspberries, strawberries and blueberries. Farther north in the tundra, tasty red and blue lingonberries resemble a blueberry's shape and cloudberries look like pale orange raspberries. Rasberries and other clustered berries, called aggregate berries, are safe to eat 99 percent of the time [source: Davenport]. In general, you should stay away from green, yellow and white berries, while 90 percent of purple, blue and black berries are edible [source: Davenport].

Keep an eye out for poisonous baneberries in Alaska. According to the Alaska Department of Parks and Recreation, these berries grow in shady woods and may be red or white. Their attractive white flowers look like lace, and you could mistake the berries for oversized blackberries.

Even the barren arctic landscape provides plant food. The buds, needles and stems from spruce trees can be eaten raw or cooked in a tea. Birch trees have edible inner bark as well, and with a little digging, you may uncover frozen berries in snow.

Take care when dining on plant food when hungry since it can cause a stomachache. In addition, while all people can safely digest all of the plants mentioned above, that doesn't mean they all taste good. Making plants palatable may require cooking, but in survival situations, sometimes you take what you can get.

If you're unsure of a plant's edibility and have the time, you can use the Universal Edibility Test. Be sure to test each plant part (leaves, roots, flower, etc.) since some plant parts can be safe to eat, while others aren't. In dire situations stick to what you know -- the test takes about 24 hours to complete. To learn how the test works, read What is the universal edibility test?