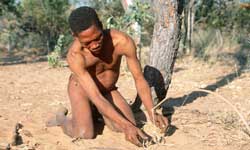 The drag noose is a little more complicated to build than the simple snare. It should be placed in a well-used run. The drag noose h­angs from a stick that's supported by two other sticks on either side that are placed in the ground. The stick with the noose attached is propped gently on the supports, but is not attached, and the noose hangs into the run. A type of wire called snare wire, which is available in a variety if thicknesses, is a good choice for forming drag nooses.

When your prey makes its way down the run, its head catches the noose, which pulls down the stick the noose is attached to. The falling stick startles the animal and it sprints away, dragging the stick behind it. The stick becomes entangled in the brush along the sides of the run, tightening the noose and stopping your prey.

The drag noose works best in an area with heavy underbrush. An open area, even with visible runs, won't do because the brush may not stop your prey soon enough for you to track it down. If the area you're in doesn't have heavy cover, consider another trap, such as a twitch-up snare.