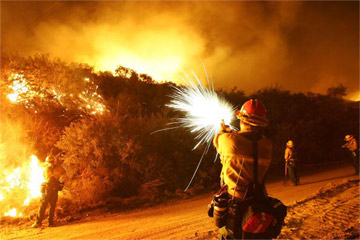 Flare guns sometimes find nontraditional uses. In this case, a firefighter is using a flare gun to start a backfire to deprive a larger fire of fuel.
David McNew/Getty Images

Using a flare gun is quite similar to firing traditional firearms. Pulling the trigger causes the hammer to hit a detonating cap. The detonating cap both fires the flare and causes it to ignite. The gun should be pointed vertically, in the air.

According to the U.S. Coast Guard, you should fire two flares in succession, which allows authorities to both see your signal and try to determine where it came from [source: Orion Safety Products]. If possible, it's best to wait until you see a rescue craft, such as a circling airplane, or know that one is in the area before firing your first flare.

You should conserve your signals and use them judiciously. If you're going out on the ocean, always make sure you have a solid cache of flares that are at most a few years old. If you need help, you may have to use multiple flares, or possibly flares of varying types, to signal and draw rescue craft to your location.

Flare guns can also be used for other purposes besides signaling. Some outdoors types carry flare guns to scare away bears and other predators [source: Tierney]. Be careful though: Firing directly at an animal may harm it -- besides possibly being illegal -- and the heat of the flare can easily lead to a fire that may quickly become out of control.

Flare guns have also been used to deal with pirates off of the Somali coast, an area that has seen an epidemic of piracy in recent years. Ships, both military and civilian cargo boats, often use flares to warn off pirates. In one incident, a Danish cargo ship fired a flare that then landed on a pirate boat, sinking it. The pirates were later taken into custody by the Danish navy.

In an ironic twist, police officers found two men illegally firing automatic weapons in the woods in Westchester County, New York, by following a flare they fired into the air. Although the men later fired their guns at the police, the officers were uninjured, made the arrests and charged the men with a litany of crimes, including attempted murder [source: New York Times]. 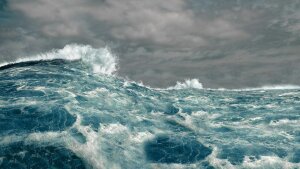 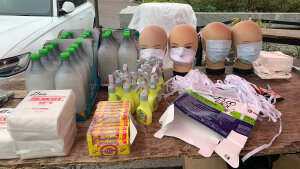 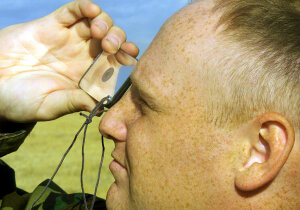