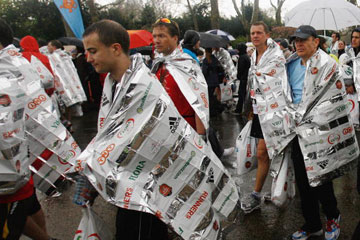 Have you ever been at the finish line of a marathon? Did you wonder why, as the runners cross the line, they wrap themselves in what looks like thin blankets of aluminum foil? These blankets help the athletes regulate their body temperatures, which tend to drop drastically once they stop running.

These sheets aren't made of the typical foil you pick up at the grocery store, though. Derived from NASA technology, the common name for these sheets of foil is space blankets. Also known as solar blankets, mylar blankets or emergency blankets, they help people stay warm. Everyone from mountaineers to astronauts to surgeons use them.

Even though space blankets are mass produced and cheaply available today, they had their start in the space program in the 1970s. In 1973, the Skylab space station began overheating while in orbit. Because of a broken heat shield, the temperature inside the station approached temperatures of 130 degrees Fahrenheit (54 degrees Celsius). As temperatures continued to rise, NASA personnel worried about the decay of equipment and food inside the station. The possibility of toxic gases was also a threat.

Engineers contacted a New Jersey company called National Metallizing to assist them in the creation of an emergency sunshield for Skylab. Up until this point, manufacturers used the metallizing process mostly for the toy industry and the making of tinsel for Christmas trees. But NASA realized the potential of these shiny, thin metallic sheets to deflect heat. Working together, the two organizations created a reflective parasol that a space crew placed on top of Skylab. It worked, deflecting the heat and allowing the spacecraft to remain at a normal temperature.

As they work to keep heat out, space blankets also work to keep heat in. Because they could reflect the wearer's body heat back toward the wearer, these blankets had potential for a multitude of uses. They/ve become invaluable to marathon runners to help stay warm at the end of a race. Hospitals find them useful to keep patients warm during surgery, as anesthesia tends to make people shiver. Campers, climbers and mountaineers -- anyone who may find themselves stranded in cold weather -- discover space blankets are an extremely lightweight and cheap addition to their first-aid kits. In 2005, after an earthquake devastated parts of Pakistan, charitable organizations delivered space blankets to the victims. People used them as both ground cover and warming blankets.

So, how exactly can a paper-thin sheet help hold in heat? How could you use a space blanket in a survival or emergency situation? Keep reading to find out. 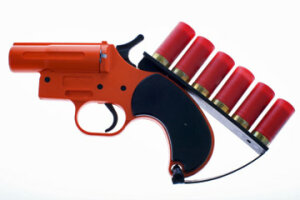