Browse the article How to Use a Handheld GPS 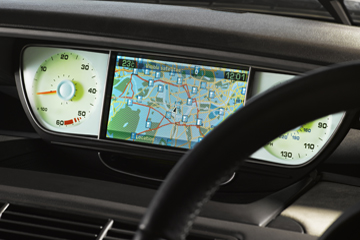 GPS, or Global Positioning System devices, have been available to the general public since the 1980s, after some years of use by the United States military. But until 2000, the U.S. government practiced something called Selective Availability, which meant they purposefully degraded the information that civilian GPS systems were able to receive. The result was that the devices could lead you off course by as much as 300 feet (91 meters), while the military version got you within 10 feet (3 meters) in most cases. Once this practice was lifted, the devices really took off in the civilian market, and companies like industry leader Garmin found themselves swimming in business.

The most common use for GPS devices is to help you get around town in your car. Detailed road maps that come loaded in your GPS device made getting lost nearly impossible and became a beacon of hope for the directionally challenged. Pretty soon, with the availability of marine, trail and topographic maps, handheld GPS devices became a source of fun for adventurers and hobbyists, not to mention a great safety tool for outdoor enthusiasts. You can now choose a GPS cell phone or a standard non-phone handheld device from all of the major GPS system manufacturers. They're generally more rugged and hardy than the kind you'd get for your car, but perform in much the same way.

Whether you're geocaching, hiking, rafting or navigating an urban jungle, a handheld GPS device can be a lot of fun and an important safety tool. We'll walk you through how to use them in this article. 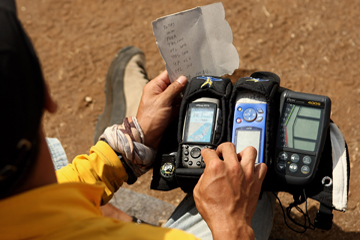 Using a handhled GPS device can be handy on an outdoor adventure.
Quinn Rooney/Getty Images

The first step to creating a route with a handheld GPS device is pinpointing your current location. The device does this by way of trilateration, locking into at least three different satellite signals to pinpoint your exact location. There's a network of 24 satellites that orbit the Earth twice a day, sending signals back to us, where they can be picked up by GPS devices. Your handheld receiver does this by calculating the difference in the time that a particular satellite sends a signal and the time that you pick it up. Once you have three of these calculations, your device triangulates your position within about 50 feet (15 meters).

Using a map that you have loaded on your handheld device, you can pick out the coordinates of whatever your destination is and program it as your end point. Now the receiver has your current location, your end point, and ideally can then figure out how to get you from one to the other with the help of the map you have loaded. How you actually program the device varies depending on the manufacturer, but detailed instructions can always be found in the user's manual. Check with the store that sold you the GPS device -- there's a chance they offer free courses on how to operate your receiver.

You can also set waypoints along the way to create a route that you can use later. These are markers that identify a particular spot by its longitudinal and latitudinal coordinates. So if you're camping, you can mark the spot where you parked your car and then at various places along the way until you reach your final destination. Once you get there, you have a route saved for later use. You can label these waypoints with custom names to help you identify them. For instance, you can call one "massive oak tree" if you're near such a thing, or "scenic overlook" if that's an obvious physical marker. Another helpful thing you can do with your handheld GPS device is to set it to track your route as you go. This creates a trail of virtual bread crumbs to ensure that no matter where you go, you'll have a route back out to civilization. 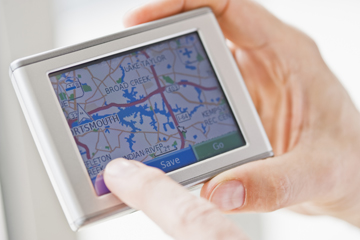 Using a handheld GPS to plot a route is technology at its best.
Tom Grill/Getty Images

Simply being able to triangulate your location and find another point on the globe is pretty handy for the outdoor adventurer, but the maps that you can access with your handheld GPS device are really what make it such a fun and useful tool. Road maps are probably the most common maps that GPS users access. Despite the fact that GPS devices are increasingly being used for sport and fun, ensuring that you don't get lost on the road is still the reason many people buy a GPS. For the road, you can choose from world maps or local area city navigators that provide detailed street information along with millions of other pieces of information like the locations of public services, gas stations, rest areas, restaurants and other businesses.

If you're into water sports and recreation, you can go with a marine map. These will take you off the road and onto the water with detailed mapping, satellite imagery, aerial photographs and enhanced 3-D maps. The 3-D view comes in handy for fishermen and divers, as you can see images above and below the waterline. If you're out on the boat and want to know where deeper water is, forget your depth finder, just take a look at an underwater 3-D image of the lake bed. In addition, ports, harbors, waterways and marinas are listed on marine maps.

Trail maps are popular with hikers, campers, hunters, climbers and geocachers, which we'll learn more about on the next page. The trail maps provide a tremendous amount of topographic detail, making it safer to venture into unknown areas. Using these maps, there's no more mistaking what's coming just around the bend or what's beyond the next mountain ridge. Trail maps are split into different geographical zones, so if you're going camping in the Northern Plains, then you can purchase and download a map specific to that area. Elevations, bodies of water, and even the density of the forest can all be found out with the help of a trail map that has 3-D terrain shading, highlighting the contours of the surrounding land.

Finally, for the urban adventurer, there are detailed city maps. These can get you from point to point with great accuracy and provide a lot of extras for the city dweller, like locations of public transportation, restaurants and shopping destinations. Some city maps even have subway and bus schedules included in the database. As to how to find the closest public restroom -- that part is still up to you. Before you buy any GPS map, make sure that it's compatible with your handheld device. 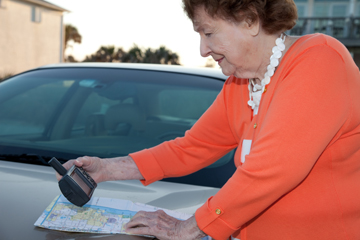 Geocaching is fun for people of all ages!
Lisa Kyle Young/Getty Images

Once you've gotten your handheld GPS device mastered, you can take part in the new and highly popular outdoor hobby called geocaching. This adventurous activity can best be described as a high-tech scavenger hunt. Players use the GPS device to locate a cache that's hidden in a tricky, sometimes difficult to access, public place. It all started in Oregon in the first days of the repeal of Selective Availability, when a GPS early adopter named Dave Ulmer hid a container in a remote area to test his device's accuracy. He posted the coordinates on the Internet with the instructions, "Take some stuff, leave some stuff." The stuff in this case, was a few small trinkets, along with log book and pencil to leave your name and date. This is how geocaching was born.

Since then, the hobby/sport has evolved into a serious past time, with the Web site geocaching.com reporting more than 900,000 caches hidden as of November 2009 [source: Geocaching.com]. The most important thing you need in order to go on a geocaching adventure is your handheld GPS device. This is what will guide you to the area where the water-tight container of goodies awaits you. From there, it's up to you to find it. Part of the fun of hiding a geocache is placing it in a spot that doesn't immediately jump out at you once you're at the location. Caches can be hidden inside tree trunks, underneath a playground see-saw or park bench, or even under water. The idea is that the GPS device should get you close to the cache, but not pinpoint its exact location.

The other thing you should remember to bring along on your geocaching adventure is a prize to leave in place of whatever you take. It can be anything from a Santana CD to a figurine you got on your tour of the Vatican. Any kind of fun bauble or tchotchke works well, just don't ever include any weapons, food items, alcohol or illegal drugs. Chances are, the cache will include the log in book and a pen or pencil. This is a fun way to keep track of fellow geocachers. There are many Web sites that have cache locations, but geocache.com is the best place to get the most comprehensive listing. If you're interested in using your handheld GPS device to geocache, make sure you bring along some extra batteries before you set out into the woods. Not only will you not be able to find your cache, but you could always get lost if you device runs out of juice.