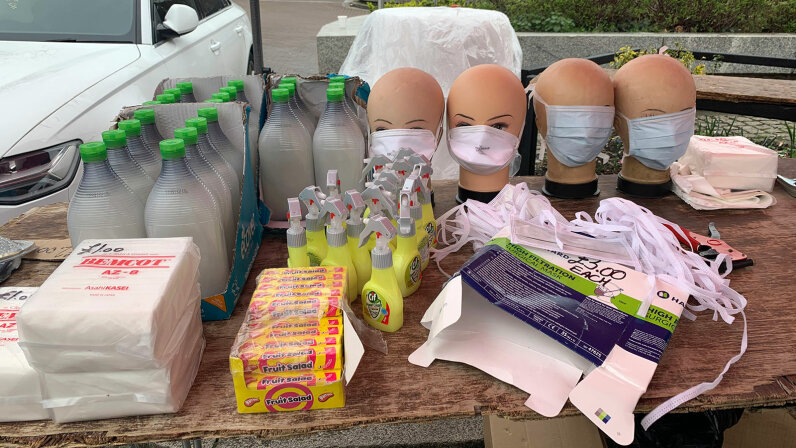 Face masks and cleaning materials are seen for sale on a market stall on March 19, 2020 in England. But if you can't find these and other items to buy? Marc Atkins/Getty Images

Life's journey can be difficult enough to navigate even under optimal circumstances. There are bills to be paid, hours to log at work and in-laws to deal with. Yet, most of these obstacles are likely to fade into the background in the event of a disaster like a pandemic, hurricane, earthquake or zombie apocalypse.

As unlikely as it may sound, survival scenarios can and do happen, whether it's a hidden sink hole suddenly gobbling up a suburban home or a tornado blowing an entire town off the map. Fine, maybe there's no proof that zombies are immediately threatening our way of life, despite how real these brainless creatures are made to look on TV. One can never be too safe, however, and it's important to be prepared.

Fortunately, you already have many of the things that can help you ride out a storm, flood or influx of the walking dead. Here's a list of what those items are, as well as some surprising ways to use them.

Just because the lights are out, the floodwaters are rising and the end may be near doesn't mean you might not need to go to the bathroom. When nature calls, and you've unfortunately run out of toilet paper, dial up that old dusty phone book.

Tear out a few pages; crumple them up and smooth them out a couple times to make them more pliable and wipe away. Just don't flush them, or you risk clogging the plumbing (and the plumber won't be making house calls just then). This makeshift TP might be a little harsh on the backside, but chances are you'll have bigger worries to contend with. (P.S., if you don't have a phone book, you can use newspaper, leaves from certain plants or cut-up cloths.)

This survival item has so many uses you probably didn't know it was originally intended for keeping moisture out of ammunition boxes during World War II, while still making the boxes easy to open under fire. (Hence its original name of duck tape). But soldiers soon found other uses for it, including patching guns and Jeeps.

That versatility makes duct tape good to have around in emergency scenarios. Whether you need to patch a hole, bandage a wound, fashion a belt or make a water cup, duct tape is one of the first household items to turn to when disaster strikes. Just about the only thing you should not use it for is sealing air ducts, because it loses its adhesiveness pretty quickly in heat.

OK, maybe keeping clean might not be your top priority in a survival situation. But you might get pretty dirty and smelly moving debris, and taking a shower could well be out of the question. Stay fresh — and clean wounds — by rubbing yourself down with a couple of baby wipes. You can also use them to wipe down sticky kitchen counters or objects, or sticky children. And if you can't find disinfectant wipes, you can use baby wipes to clean and disinfect your house. Just spray some antibacterial cleaner — or diluted bleach — on the wipe.

Like duct tape, aluminum foil makes the list because of the seemingly endless array of ways it can be used. The nearly 100-year-old product is lightweight, durable and even recyclable in the event there's much of Mother Earth to be saved. You can use foil to wrap and cook food, make a funnel or even sharpen knives (just fold a sheet of foil several times and cut through it with the knife to sharpen the blade). You can use it to warm up a room by wrapping a piece of plywood in foil and stowing it behind a radiator to reflect heat; or tape the foil to a window, shiny side out, to keep the sun out. For well-used power generators, a couple foil scraps will serve as a tool for rust and corrosion removal.

This stout lubricant was originally invented in 1953 to prevent rust and corrosion — the name comes from the fact that it was the 40th version of the formula that worked. Since then, people have found lots of survival uses for it, from winterizing boots to keeping falling snow from sticking on windows to warding off rodents and other critters by spraying down their lairs. You can even use it to soothe bee stings.

An Asian bus driver once used WD-40 to remove a python that had coiled itself around the vehicle's undercarriage, and police officers relied on the product to dislodge a naked burglar stuck in an AC vent. Good to know in case you get trapped crawling to safety in an underground pipe.

A world atlas probably won't do you much good, but a local street map can certainly go a long way if you need to get out during a disaster situation. Google Maps, MapQuest and GPS all require electrical or battery power and an Internet connection. That's not to mention that sometimes they're plain wrong on the directions front.

A paper map is a good backup in case you're trying to get out of town on a road less-traveled. Make sure you have a street-level map and practice using it before you have to. Bonus: The map may have additional uses if you can't find the phone book.

Water should be one of your biggest concerns in a survival situation. The wet stuff comprises 78 percent of the human body and we Homo sapiens need about a gallon a day to remain properly hydrated. We can only last about three days without water before we die, while we can last three weeks without food.

In the great outdoors, the best sources of water are springs, head-water streams and morning dew. At home, stock up on enough water to have at least 3 gallons (11 liters) per person, which would give you a three-day supply. (Of course, store more if you can in case the emergency lasts longer.) And don't forget to boil it for two or three minutes before drinking. If you can't find bottled water and you're worried about the quality of your own water, you can also make distilled water or purify tap water using bleach (see our next section.)

Germs can often multiply during a disaster and you have to be especially watchful during a pandemic when disinfectants and antibacterial sprays are in short supply. Bleach (we're talking the plain unscented kind) can kill a host of microbes that make people sick. To clean and sanitize floors, walls, etc., mix 1 cup (240 milliliters) of bleach to 5 gallons (18.9 liters) of water. First, clean the surface with soap and water, then sanitize with your bleach mix. Let it air dry at least five minutes. You can make a disinfecting spray for use on food prep areas by mixing 4 teaspoons of bleach in 1 quart (1 liter) of water and pouring this into a clean spray bottle. Be sure not to add anything else to the bleach solution. Since bleach loses its disinfecting powers fairly quickly, you'll need to make a new batch each day rather than keeping the same one around.

Bleach has a ton of other uses. To purify water, use five drops of bleach to a quart of water (or 1/4 teaspoon for 1 gallon). Mix thoroughly and let it stand for at least 60 minutes before drinking. The cleaner can also be used to get mold or mildew off surfaces (useful after a hurricane), clean toilets, sanitize children's toys — and of course, to bleach clothes to get them whiter or more sanitary.

When the power goes out, so do the lights. Even if you have a couple of well-oiled generators, it's a good idea to keep a handful of flashlights — and extra batteries — around the house. Mix up the types of torches you keep: The big powerful ones illuminate the most, but they also take up a lot of space in a survival kit and can be a pain to lug around. Supplement with a smaller but longer-lasting flashlight. Energy efficient LED flashlights are a good place to start.

Forget the conventional wisdom — putting a little bit of your hard-earned money under the mattress isn't such a bad idea after all. If you're able to get out of your home in a disaster scenario, you will need greenbacks — not plastic — to pay for things like gas, food and water. When the power goes out, card readers can't operate and ATM machines can't dispense. So, keep some cash on hand.