What if you were stranded several miles offshore in cold weather?

Signaling For Help to Quench Your Thirst 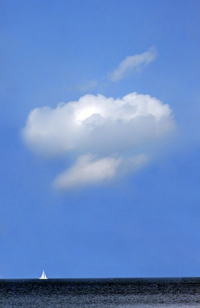 Keep an eye out for other boats that could rescue you.
Iofoto/Dreamstime.com

Because it is getting dark, your options are limited, for now, to the EPIRB, flares and horns.

Both boaters and pilots use EPIRBs. A modern EPIRB is a sophisticated device that contains:

Once activated, both of the radios start transmitting. A GOES satellite 24,000 or so miles up in space in a geosynchronous orbit can detect the 406 MHz signal. Embedded in the signal is a unique serial number and, if the unit is equipped with a GPS receiver, the exact location of the radio. If the EPIRB is properly registered, the serial number lets the authorities know who owns it. Rescuers in planes or boats can home in on the EPIRB using either the 406 MHz or 121.5 MHz signal.

After you have activated the EPIRB, start sounding the horn intermittently. Next, look around the boat for flares. If you have enough, you can set off a flare every 15 minutes for an hour in hopes that a passerby might see your distress signal. However, don't waste your flares if it seems too late for other boaters to be out and about. Save them to use when other boats are likely to be nearby. If you haven't been found by morning, you can incorporate other methods into to your routine -- such as removing the vanity mirror from the bathroom to signal others of your trouble.

You're supposed to have between eight and 10 8-ounce glasses of water a day, so that's about 64 ounces, or half a gallon. Your roommate brought a gallon-sized jug of water on board that morning, but he's been drinking it all day. Luckily, the boat you're on probably has a tank. For a 28-footer, you can expect there are about 24 to 32 gallons of potable water in the tank. If for some reason the tank is empty, you can look inside the emergency kit that accompanies the life raft for water purification tablets and filters to create your own drinking water.

If you're on the ocean, instead of a lake -- and you're lucky -- you'll have a solar desalination kit. If not, you have a real problem. Never drink seawater, as the salt will only hasten dehydration.