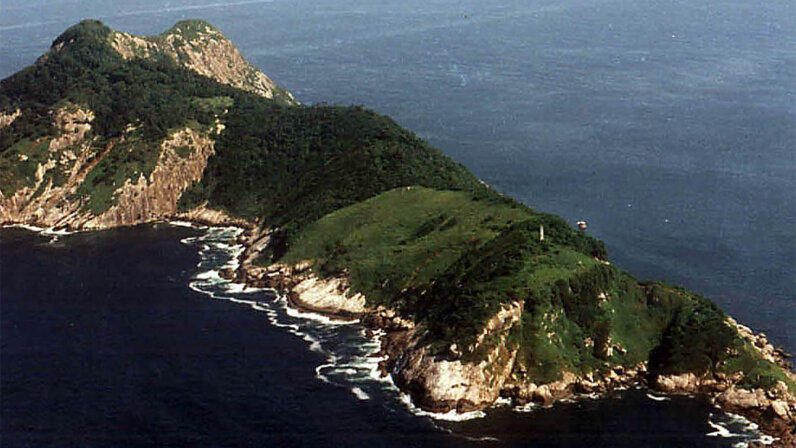 Ilha Queimada Grande is an idyllic jungle paradise, so why is it that nobody lives, or even visits, there? Could it be ... the snakes? You think? Flickr (CC BY 2.0)

Ilha da Queimada Grande is the perfect plot device for an Agatha Christie novel. Off the coast of Brazil sits an idyllic jungle paradise — an island uninhabited by humans, the resting place of migrating birds, ringed by plunging cliffs and deep cerulean waters. But why has an international playboy on a pleasure cruise turned up dead in a pool of his own melting flesh? What evil mastermind has suggested he dock his yacht at "Snake Island," the most venomous 106 acres (43 hectares) on Earth?

You can use that book idea if you don't have your own. You're welcome.

Ilha da Queimada Grande is literally crawling with golden lancehead (Bothrops insularis) pit vipers, a snake with venom about four times more potent than that of their mainland cousins, the regular old lancehead snakes (all in the genus Bothrops), of which there are 45 species living in Central and South America. Ninety percent of snakebites in Brazil come from Bothrops pit vipers, so it's good that nobody's allowed on Snake Island, because that figure would rise significantly.

Golden lanceheads are endemic to Ilha da Queimada Grande — it's the only place they can be found in the whole world, which has landed them on the IUCN Red List. Most people in São Paulo, Brazil (the closest city) know about the island, even though practically nobody has ever been there. But there are stories — of fishermen landing to pick bananas, never to be heard from again, and of a lighthouse keeper and his family executed by a team of murderous and highly motivated golden lanceheads that found a way through one of their windows. Who knows if these stories are true, but they certainly scare people away. It's actually illegal to step foot on the island since a conservative estimate of the density of golden lanceheads is about one snake per square meter, or one every 3 feet. If you were to be allowed onto the island by the authorities — only a few members of the Brazilian Navy and a handful of herpetologists can boast that pleasure — you would never be more than a couple steps from one of the most excruciating deaths you could possibly meet.

A golden lancehead bite could kill you in under an hour. Although only about 7 percent of bites result in death, it's an extraordinarily painful injury to incur. Golden lancehead venom is extra-powerful because the snakes eat mostly migrating birds that use Ilha da Queimada Grande as a stopover. The snakes strike their prey and wait for the toxins to take effect — but the venom has to be super fast-acting so the birds don't fly away before the snakes have a chance to feast on them. Golden lancehead venom contains a comprehensive cocktail of toxins: neurotoxins (which affect the nervous system), hemotoxins (which target the blood), bungarotoxins (which paralyze the muscles) and cytotoxins (which annihilate cells). The golden lancehead basically incapacitates its prey while melting the prey's flesh in order to make it easier to swallow.

Incidentally, Snake Island is home to another snake species, Sauvage's snail-eater (Dipsas albifrons), which is not at all venomous. Not that anybody cares.

Now That's Interesting
The golden lancehead has been evolving separately from its mainland cousins for about 11,000 years, when sea levels rose enough to turn Ilha da Queimada Grande from a mountain into an island.